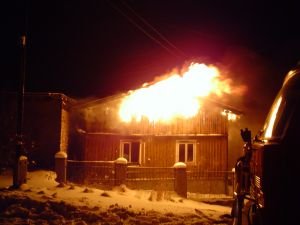 Sixth Precinct Officers Sean McAuliffe, Michael Mortilla, and Robert Spadaccini responded to a house fire located at 142 West Yaphank Road at 3:07 p.m. When the officers arrived they found Jamel Shands and Chanell Duncan hanging out the second floor windows of the home, unable to get out due to the fire and smoke. The officers entered the house, located the victims and escorted them through the heavy smoke to safety.

Shands, 36, and Duncan, 34, were uninjured. Patricia Barrett, 55, who was on the first floor of the residence, was able to escape on her own.

The Coram Fire Department responded and determined the fire was started in the kitchen, and spread to an interior wall behind the stove. It is not considered suspicious.