At least 12 homes have been washed out to sea in the worst storm in this area since the Hurricane of 1938, and 80% of the remaining homes have some kind of damage.

Hurricane Sandy has devastated much of our 34 mile long Fire Island National Seashore, otherwise known as “Fire Island”, home to a year round population of less than 500 that swells to as many as 30,000 residents during the summer throughout the 17 settled areas.

AP reports that at least 12 homes have been washed out to sea in the worst storm in this area since the Hurricane of 1938, and that 80% of the remaining homes have some kind of damage. There are no currently functioning marinas or running ferries. Docks, boardwalks, homes and decks have been torn apart. 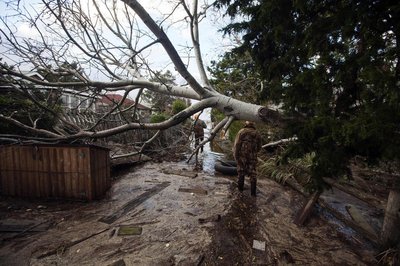 The storm’s 90 mile an hour winds, high tides, record storm surge and tremendous waves have removed miles of beach and protective dunes and caused numerous breaches between the Atlantic Ocean and the Great South Bay. As per Chris Soller, Fire Island’s National Seashore superintendent, there are “breaches on the far eastern end of the island, with one so deep that it could effectively divide Fire Island into two separate islands." There are reports that this breach has corrected itself.

The easternmost portion of Fire Island, Davis Park, is reported to have lost 7 homes and the ocean has breached the bay throughout a large part of Moriches Inlet as well as at three locations east of Davis Park, essentially cutting off access to all of Fire Island from the east.

Ocean Beach with nearly 150 year round residents, are reporting up to 40 oceanfront homes damaged or destroyed, and one home is known to have burned down. Fire departments from Ocean Beach, Kismet, Islip Town, Cherry Grove and Ocean Bay Park had equipment at the ready and were able to respond quickly, control the blaze and put the fire out without it further damaging adjacent homes.

Seaview, Kismet, Ocean Bay Park and Point O’ Woods appear to have suffered major ocean side damages and flooding from aerial footage taken after the storm, and have lost several homes some of which are standing precariously perched on the beach.

The Pines were spared from losing any oceanfront homes, although extensive damage to property, pools and decks have been reported, as well as a very severe breach from the ocean to the bay just east of the Pines. Cherry Grove residents were spared from the most catastrophic damages and have suffered no loss of homes.

As of now, the island is not safe without electricity or phone lines. Water services have been compromised or are not available. Debris, downed wires and electrical transformers are strewn about the walks. Access to the island is being strictly controlled and there is a ban on residents returning to the island as rescue and emergency services cannot access the island in the case of an injury. The ban is hoped to be lifted early next week, as per Jay Pagano, FIPPOA President.