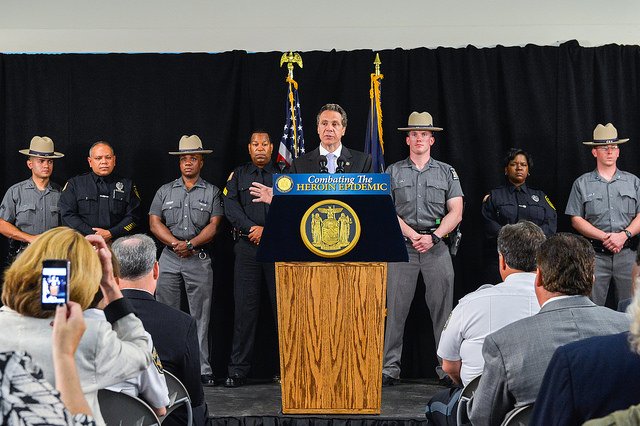 Albany, NY - June 11, 2014 - Governor Andrew M. Cuomo today announced a statewide initiative to combat the rise of heroin use. The multi-faceted approach includes the addition of 100 experienced investigators to the State Police Community Narcotics Enforcement Team (CNET), nearly doubling the number of troopers currently serving in the unit in order to more aggressively combat heroin trafficking. Additionally, the State will launch an unprecedented effort to make supplies of naloxone, a leading overdose antidote, available to all first responder units in the State. The Governor also announced a targeted awareness campaign that will take place on all public college and university campuses.

“Today, New York State is taking a major step forward in the fight against heroin. By nearly doubling the State Police’s drug enforcement units with the addition of more than 100 seasoned investigators we are going above and beyond to combat this deadly drug,” Governor Cuomo said. “Additionally, providing supplies of naloxone to all first responder units and raising awareness through our SUNY and CUNY campuses will save lives in communities across the State.”

There are five regional CNETs deployed across the state to assist local police with areas blighted by drug trafficking and related street crimes. Through CNET, specially trained State Police undercover narcotics enforcement personnel are available upon request to assist any police agencies north of New York City. CNET personnel fill a critical void for many rural, suburban and small city police departments, which typically lack the personnel or resources to maintain their own trained undercover narcotics units.

The addition of 100 experienced investigators will enable the CNET units to combat heroin trafficking and cases on a wider scale, including by conducting more long term and sophisticated cases, deploying an increased number of undercover personnel, and expanding successful K-9 units dedicated to CNET.

State Police Superintendent Joseph D’Amico said, “Heroin use, heroin sales and related heroin drug overdoses have become a widespread problem that simply must be addressed. A crisis this large must be combated on all fronts. I am pleased that the Governor has committed the necessary resources needed to meet that challenge.”

Naloxone is an emergency treatment that blocks the effects of opioids on the body, and can reverse the effects of an overdose. It works by temporarily reversing the effects of the opioid, whether illicit or prescription, allowing the individual to regain consciousness and resume normal breathing. When administered to a person suffering an opioid overdose, naloxone can reverse the overdose in a matter of minutes in a vast majority of cases saving the lives of those involved. It poses no danger to persons who otherwise might come into contact with it and it is not the kind of medication that can be abused.

In addition to the increased State Police presence, the Governor also announced the launch of an awareness and support campaign involving all SUNY campuses that includes:

“Increased awareness of the dangers related to heroin use and other narcotics is an essential component in any effort to effectively combat drug abuse and its effects on our young people,” said SUNY Chancellor Nancy L. Zimpher. “The State University of New York is proud to be a part of the Governor’s initiative and thankful for the additional resources as our University Police and campus administrations and staff continue to support our students while ensuring their health and safety.”

Heroin is a highly addictive depressant, with users representing a variety of ages, races and other backgrounds. Fatal overdose, the contraction of HIV/AIDS and addiction and dependence are among a plethora of negative side effects that can result from heroin use. In addition to physical danger, heroin use threatens a user’s social life – often straining family bonds, friendships and professional relationships.

Across the nation, heroin abuse has been increasing at dangerously high rates in recent years. In 2013, there were 89,269 cases of heroin and prescription opiate treatment admissions in New York State alone, an increase from 63,793 in 2004. During this same time period, the drug also disproportionately impacted New Yorkers ranging in age from 18 to 24. Nationally, as many as 467,000 people were reportedly abusing heroin or suffering from heroin dependence in 2012.