The $815 million in funding is the next phase of Hurricane Sandy recovery. 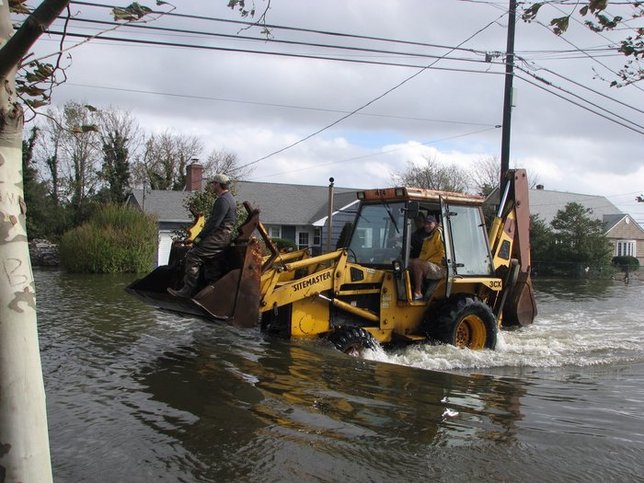 On Thursday Governor Andrew Cuomo announced funding for a series of Superstorm Sandy recovery and rebuilding infrastructure projects on Long Island. $815 million will go to rehabilitating wastewater treatment plants, upgrading Long Island’s utility system, creating microgrids, and strengthening bridges which have been weathered down by storms.
“In the last year, New York State has delivered essential funding to homeowners and businesses impacted by Superstorm Sandy, allowing homes to be repaired and the doors of businesses to reopen,” Governor Cuomo said. “This funding is the next big step in Long Island’s recovery. We are providing $815 million to Nassau and Suffolk counties so that they can move forward on critical public works projects, rehabilitating and strengthening infrastructure that suffered costly and serious damage in communities across the island.
$697 million will go to rehabilitation and mitigation of wastewater treatment facilities in Nassau and Suffolk. This will help Nassau’s Bay Park Sewage Treatment Plant which was damaged during Sandy when nine feet of water flooded the pumping system and sewage spilled into local neighborhood homes. The plant was closed for 50 hours and 200 million gallons of raw sewage flowed into channels and waterways, and destroyed the plant’s electrical system.
More than $400 million will go to fixing the damage. A system of dikes, levees, and movable flood walls will surround it. The electrical plant distribution system will be elevated and hardened and existing generators will be repaired so it stops running on temporary power. Another precaution being taken in preventing floods is the hardening and replacement of sludge dewatering equipment and building damaged during superstorm Sandy.
New York State will provide $242 million for the Bergen Point Wastewater Treatment Facility in Suffolk County. The plant’s ocean outfall pipe that runs beneath the Great South Bay will be replaced and widened to 120 inches. The improved piping addresses any concerns of old pipes failing with an increase of pressure due to heavy flow from storms. The Bergen Point Plant serves 120,000 households.
$51 million will go to PSEG-Long Island to upgrade the current technology. The improvements will reduce outage durations, restore power quickly, and provide restoration times. About $60 million will go to creating microgrids in both Nassau and Suffolk, and hardening vulnerable bridges on Long Island.
Five Nassau and three suffolk bridges will be better protected from future storms. The Nassau bridges include three Meadowbrook Parkway bridges that go over the False Channel, Fundy Channel, and Sloop Channel. Bridges on Loop Parkway and the Southern State Parkway will also be hardened. The three bridges in Suffolk which will be hardened are all on the Robert Moses Causeway.
$444 million has gone to local governments for the reimbursement of previous repairs and recovery services.
Also announced Thursday by Governor Cuomo is the Come See the Comeback tourism campaign. The campaign promotes tourism by highlighting the progress our local communities have made since Sandy. The MTA has partnered with the campaign by providing discounts on the Long Island Railroad to areas where progress has been made. Cuomo also has unveiled the “I Love NY” logo on MetroCards and trains. The campaign is funded by the state’s tourism budget with no cost to the MTA.
“Our customers will be seeing the 'I Love NY' message throughout our network,” said MTA Chairman and CEO Thomas Prendergast. “The MTA is once again demonstrating its power to drive our region's economy -- by urging our customers to get on board, travel the state, and see for themselves how New York has come back from Sandy.”
One LIRR package is the Montauk Village & Golf package which includes a discounted round-trip rail, taxi stubs into town, and coupons for participating merchants. Also offered is free shuttle service through November 9-11 that connects passengers to various wineries on the North Fork. Another package includes rail fare to the Arches in Deer Park.
[Source: Governor Andrew Cuomo]
Feature Image Courtesty of Thomas Gernon
Photos of Bay Park Sewage Treatment Plant Courtesy of Governor Cuomo