An experimental space vehicle designed to help NASA pave the way for future trips to Mars has missed a string of potential launch dates. 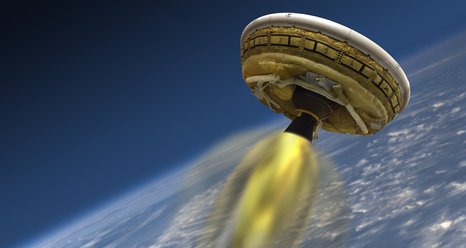 Update - June 12, 2014 - Long Island isn’t the only part of the country being bogged down by poor weather this week. Unexpected adverse wind and weather conditions in Kauai, Hawaii have prevented NASA from sending its LDSD “Flying Saucer” on its inaugural test flight during the designated launch period.

The LDSD team had spent two years researching the locations and conditions around the globe that would allow for a successful launch of their balloon-carried saucer, eventually settling on Kauai as the perfect place to carry the craft away from populace areas and to the proper spot for launching the NASA test vehicle. The first half of June 2014 was expected to be ideal for a launch; unfortunately, the weather simply would not cooperate.

“There were six total opportunities to test the vehicle, and the delay of all six opportunities was caused by weather,” said project manager Mark Adler. “We needed the mid-level winds between 15,000 and 60,000 feet to take the balloon away from the island. While there were a few days that were very close, none of the days had the proper wind conditions.”

NASA is continuing to search for future launch windows and is currently looking at predicted weather conditions in Kauai that could provide another opportunity later this month.

“Our team has been working on this project for several years, and we have been so focused,” said principle investigator Ian Clark. "We came here to do our job and get this vehicle off the ground, but unfortunately weather didn't allow us to do this. We are very optimistic and are hoping to test the vehicle at the end of the month."

Original Story - June 3, 2014 - Flying saucers have long been icons of Science Fiction, depicted as the vehicle visitors from another planet would use come to Earth in every medium from movies and television to literature and radio. This month, however, NASA will pull the flying saucer out of fantasy and into reality as it launches a disc-shaped test vehicle into the stratosphere.

Construction of the rocket-powered Low-Density Supersonic Decelerator (LDSD) was completed last month at the Navy's Pacific Missile Range Facility in Kauai, Hawaii, clearing one of the final hurdles before the vehicle can lift off. When the saucer is ready for its maiden voyage a helium balloon will lift it to an altitude of about 120,000 feet, then its booster rocket will quickly propel it another 60,000 feet higher. From there, the LDSD will perform a series of automated tests before descending back to the planet’s surface.

The test flight will help NASA gather data it could use for landing heavy payloads on Mars and see if the vehicle can operate as designed in near-space at high Mach speeds. Conditions in the upper layers of Earth’s stratosphere are the most similar environment available to the thin atmosphere of Mars, and will allow engineers to observe how the LDSD would behave if sent on a mission to the red planet.

“This first test is a true experimental flight test,” said Ian Clark, LDSD principal investigator. “Our goal is to get this first-of-its-kind test vehicle to operate correctly at very high speeds and very high altitudes.”

“We are pushing the envelope on what we know," he added. “We are accepting higher risk with these test flights than we would with a space mission, such as the Mars Science Laboratory. We will learn a great deal even if these tests, conducted here in Earth's atmosphere at relatively low cost, fail to meet some of the mission objectives.”

As NASA continues to plan missions to Mars, technology like the LDSD will be vital in allowing heavier payloads to be delivered during increasingly ambitious robotic missions and could even pave the way for human expeditions.

“The success of this experimental test flight will be measured by the success of the test vehicle to launch and fly its flight profile as advertised,” said project manager Mark Adler. “If our flying saucer hits its speed and altitude targets, it will be a great day.”

Two experimental supersonic decelerator technologies will also be used during the saucer’s test flight, giving NASA even more data on the tools that it aims to one day send to Mars. When the launch takes places live images and commentary will be streamed for public viewing.

NASA identified six potential dates for its test flight, the first of which already passed on the morning of June 3. Due to inclement weather conditions that launch did not occur, but the potential remains for the test to take place on June 5, 7, 9, 11, or 14. The decision whether to launch will be made the day before each date based on weather conditions.