NASA has released images and video of a coronal mass ejection that occurred on the morning of April 2, 2014. 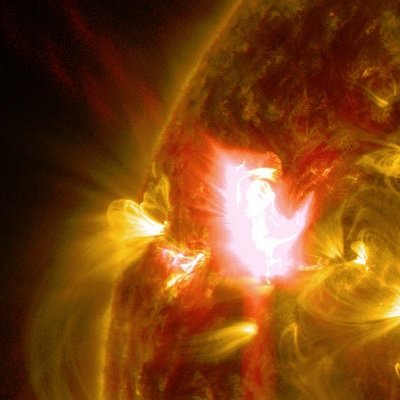 The National Aeronautics and Space Administration has released footage of a mid-level solar flare which erupted on April 2, peaking at 10:05 AM EDT. Images from NASA’s Solar Dynamics Observatory show the event through a mix of two different wavelengths of ultraviolet light colorized in yellow and red.

Solar flares are powerful busts of radiation and, though harmful radiation for the blast cannot penetrate Earth’s atmosphere far enough to affect humans or other life, particularly intense bursts can disturb the atmosphere enough to disrupt GPS and other satellite signals.

The NOAA NWS Space Weather Prediction Center did issue a watch for a potential G1-class minor magnetic storm three days after the initial coronal mass ejection (CME), but the flare ultimately had little impact on communications systems as a geomagnetic storm was not triggered when the CME hit.

NASA classified the burst as an M6.5 solar flare, which is six times more intense than a weaker M1 flare but only a tenth of the strength of the most powerful X-class flares.