The National Weather Service predicts the potential for a significant coastal storm from late Tuesday into Wednesday. 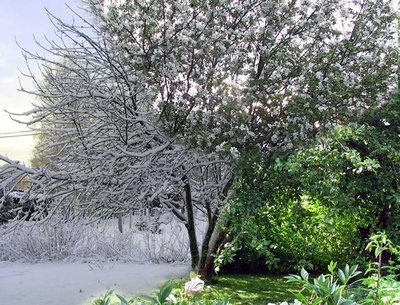 With temperatures barely making it into the 30s today and snow headed our way Tuesday night into Wednesday, spring, which made its official debut last Thursday, will take yet another setback on Long Island.

The National Weather Service predicts the potential for a significant coastal storm from late Tuesday into Wednesday and has posted a Hazardous Weather Outlook for northwestern, northeastern, southwestern and southeastern Suffolk for Tuesday through Sunday.

With some uncertainty as to the track and strength of the storm, the NWS reports that a shift in the track of less than 100 miles in either direction will result in a significant difference in impacts across the area. There is a chance for at least six inches of snow across mainly eastern Long Island.

According to the NWS, current sunny conditions at Islip, Long Island MacArthur Airport will give way to clouds later tonight; and Tuesday thickening clouds will bring a chance of light snow, mainly after 1 p.m. with temperatures topping out at near 37 degrees.

Tuesday night snow is expected mainly between 8 p.m. and 4 a.m. Wednesday morning. Low temperatures will be around 27 degrees, and wind gusts could reach 24 miles per hour. Snow accumulations of one to three inches are possible with the heaviest accumulations on the extreme east end of Long Island.

Wednesday, the chance of snow showers continues, mainly before 7 a.m. Then the snow will give way to mostly sunny skies, and temperatures will reach a high near 37 degrees.

Thursday will bring increasing clouds and a high near 42 degrees; and on Friday temperatures will climb to around 53 degrees under mostly cloudy skies.

With a chance of showers on Saturday, temperatures are expected to hit a high of around 57; and on Sunday we can look forward to a high near 53 degrees under sunny skies.

As temperatures rebound by the end of the week, hopefully, we can finally welcome spring and trade in our snow shovels for our garden shovels.