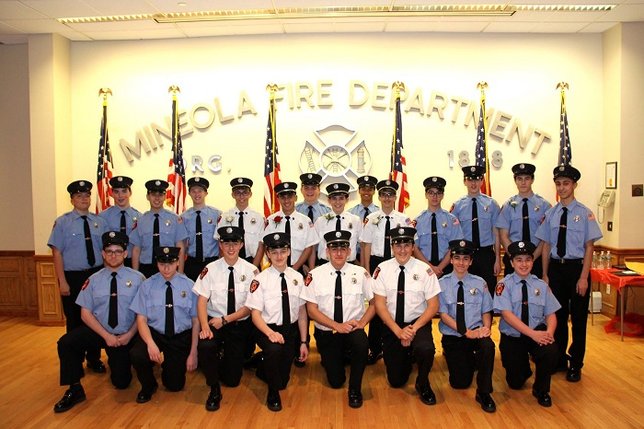 Community service a hallmark of the junior firefighters of the Mineola Junior Fire Department.

Mineola, NY - June 1, 2016 - Mineola Junior Firefighters named “NYS Youth Group of the Year 2016” by the Firemen’s Association of the State of New York.

WHAT: Mineola Fire Department Junior Firefighters are presented with the Firemen’s Association of the State of New York (FASNY) 2016 YOUTH GROUP of the YEAR Award; Award pins and plaque will be presented to the teenagers.

Since 1976, the Mineola Junior Fire Department has served the village of Mineola by providing young men and women an opportunity to experience the challenges and rewards of the volunteer fire service. Through exposure to the different activities, training and social aspects as well as emergency responses, Mineola Junior Firefighters begin to understand the benefits of making this choice.

More than 75 percent of the junior firefighters go on to join the ranks of one of Mineola’s three fire companies, making the juniors program the department’s greatest recruitment resource. Many of the Mineola Fire Department’s current ranking officers, including two chiefs, got their start in the juniors. New members are immediately taken into a training regimen in conjunction with the three companies of the fire department.

Junior firefighters who have completed a ride-along training program are authorized to ride the apparatus to alarms if seating is available. Juniors may be utilized to perform support functions on-scene, including crowd control, assisting in changing air tanks and mop-up work like packing hose and returning equipment to the apparatus.

Community service is a hallmark of the junior firefighters. They continually help the village in numerous capacities. Juniors accompany the Mineola FD Fire Prevention Committee as they inform the public about fire safety. For many years, the juniors have raised funds for charitable donations and conducted food drives to benefit pantries in the region. The juniors participate in all the uniformed activities that the department attends, including parades, civic functions and funerals. While most teenagers are celebrating a day off from school on snow days, the juniors can be found at the firehouse assisting on snow standby.

When a teen from a Mineola FD family was stricken with leukemia, the juniors hosted a fundraiser and conducted a blood drive that netted over 100 pints of blood. The endeavors of the junior fire department often extend well beyond the borders of the village of Mineola. Juniors have twice traveled to train with 11 junior fire departments from Hamburg, Germany, and have twice hosted them here in the U.S.

A few years ago, Japan sent a delegation of government and fire service leaders to the U.S. on a quest to better the programs they have at home. They visited the FDNY to gather information, then came to Mineola to see how a successful youth-centered fire service organization is operated.

Mineola’s junior firefighters saw first-hand the devastation a hurricane could produce following Superstorm Sandy. The juniors organized fundraisers to assist the displaced residents of Long Island and traveled to the Rockaways to serve meals to nearly 1,000 residents on Thanksgiving day.

The Mineola Junior Fire Department has become the benchmark for other junior fire departments in the region, the state and even internationally. Departments often reach out to Mineola FD for guidance on setting up similar programs and local schools often recommend their youth become involved with the Mineola Junior Fire Department to learn the demands and rewards of volunteer service. Teachers, school administrators, prospective colleges and future employers recognize the skills and attributes available through junior firefighting membership: leadership; self-discipline; respect for self and others, responsibility and maturity.