The Compassionate Care Act would give those suffering from debilitating ailments an alternative from the usual medication. 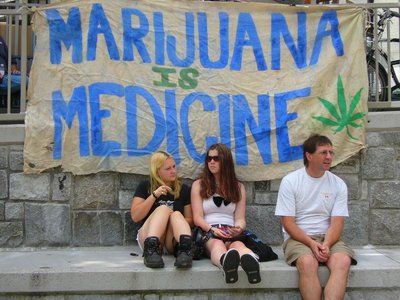 On Friday Long Islanders came together at Garden City’s Long Island Rail Road train station in support of a New York Medical Marijuana act. The activists petitioned and handed out flyers to let people in support of the Compassionate Care Act know that they should contact their Senators to vote on the bill before the June 20 legislative session ends. The bill is tightly regulated and would only allow people who are suffering to access the medical marijuana.

In a campaign overview of the bill, Julie Netherland, Deputy State Director for the New York Office of the Drug Policy Alliance, writes, “For some patients, currently available medications are just not effective in treating the devastating symptoms associated with diseases like cancer – nausea, pain, wasting, muscle spasms and loss of appetite. Even Marinol, a FDA-approved oral medication that contains some components of marijuana, has been shown by research to be ineffective for some patients. Medical marijuana would ease the pain and suffering for patients in New York who are living with cancer, HIV/AIDS, multiple sclerosis, glaucoma and other debilitating diseases.”

The only way a patient would be able to get the medical marijuana is by first applying for it by going through the Department of Health. If approved they would receive an identification card. Only hospitals, designated non-profit, or for-profit companies, would be allowed to dispense the marijuana to registered patients under DOH supervision.

The Compassionate Care Act would allow medical practitioners to speak to their patients with painful ailments about using marijuana as treatment. It would give an alternative treatment to those suffering daily from nausea, appetite loss, pain, and anxiety

“Eighteen states – including Massachusetts, Connecticut, New Jersey, Delaware, Maine, Michigan and Arizona – and the District of Columbia have passed laws allowing patients to access medical marijuana.” Netherland says. “It’s time for patients in New York to have the relief they need and deserve.