Vacationers get a surprise when a dry ice bomb set off by a 22-year-old employee explodes in a nearby garbage can. The employee is now being held on $1 million bail. 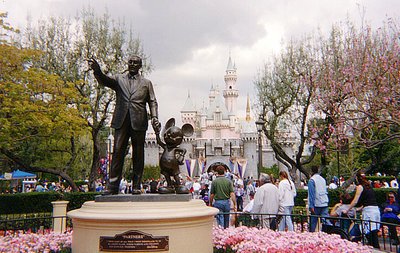 A Disneyland employee was arrested on Wednesday on suspicion of detonating a dry ice “bomb” in a trash can at the park on Tuesday evening.

22-year-old Christian Barnes of Long Beach, California, was working in Toontown as an outdoor vendor selling sodas and water from a mobile cart when he was spotted with the bomb materials hours before the blast.  No one was harmed in the small explosion, but it stirred some panic in the park that is geared toward families with young children.

Disney chose to evacuate the park for two hours while police investigated the scene.

"We take matters like this very seriously and are working closely with local authorities," Disneyland spokeswoman Suzi Brown said in a statement. Brown also stated that Barnes will either be suspended or fired for the incident.

Barnes is currently being held on $1 million bail.

According to CBS News, Anaheim Police were told by bystanders that the loud bang came from a nearby trash can.  Inside, they found the "remnants of a water bottle, which is indicative of a dry ice explosion," Sgt. Bob Dunn said in a statement.

Dunn also added that Barnes was cooperating with the police, and that it appears that it was merely meant to be a prank.

Though there have been other dry ice blasts in Anaheim, police believe that the incident is unrelated.

"You wouldn't expect situations like that coming to a place like this. That is crazy, that's wild," said West Covina resident Jonathan Rosario to The Los Angeles Times. "It reminds us we all need to do our part to be safe."