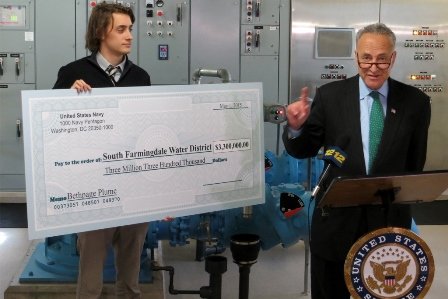 Seaford, NY - May 7th, 2015 -  U.S. Senator Charles E. Schumer was recently joined by South Farmingdale Water District (SFWD) Board of Water Commissioners Ralph Atoria, John Hirt and Gary Brosnan to present SFWD with a check for $3.3 million due to the recent U.S. Navy reimbursement settlement resulting from plume contamination originating from the Grumman Aerospace and Naval Weapons Industrial Reserve Plants in Bethpage operated by the U.S. Navy. SFWD had borrowed almost $5 million from the Town of Oyster Bay to construct Plant No. 3, a new water treatment facility to filter and purify the groundwater of the impending plume.

Since repaying the bond would have cost consumers $1.5 million each year over the course of the loan, Schumer in September called on the U.S. Navy and Department of Justice (D.O.J.) to prevent significant water bill increases for thousands of District taxpayers. He immediately followed through on the Navy’s obligation to reimburse SFWD for the capital costs, operating and maintenance of a new water treatment facility constructed at Plant No. 3 on Hicksville Road in Seaford, New York. Schumer publicly stated that consumers should not be on the hook for a problem they did not create.

Schumer's announcement means that local ratepayers will not be financially responsible for the new water treatment facility at Plant No. 3. Instead the Navy is paying for the entire construction of Plant No. 3’s new water treatment facility. Schumer also said that the second installment of funds will be made soon.  SFWD has submitted the appropriate paperwork, which needs to be reviewed and approved.

“South Farmingdale Water District ratepayers didn’t cause this toxic mess, and this $3.3 million in reimbursement from the US Navy means they won’t have to pay to clean it up,” said Schumer. “South Farmingdale Water District has waited far too long for these funds, but the day has finally arrived. I am pleased that the Navy and Department of Justice have finally provided the resources needed to pay down the bonds, prevent water rates from sky-rocketing and keep our drinking water clean.”

The SFWD Board of Commissioners have continually expressed that all water pumped from all wells meet or exceed all local, state and federal standards. The Commissioners had no choice but to design, construct and build the water treatment facility at Plant No. 3 in order to ensure that the water delivered within the District remains safe to drink.