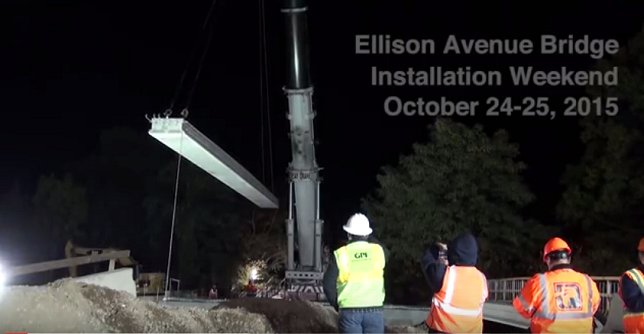 At a ribbon cutting ceremony, Nowakowski said: “We want to thank Sen. Martins, Assemblyman Montesano, County Executive Mangano, Legislator Schaefer, Mayor Cavallaro and the residents of this community for their cooperation as we planned and executed this project and their patience during this year-long process. The MTA and Long Island Rail Road are proud to deliver a new bridge, one that you can be confident will provide safe and convenient passage for pedestrians and motor vehicles for many decades to come.”

State Senator Jack M. Martins said: "Today the community says goodbye and good riddance to the old Ellison Avenue Bridge, rated the worst bridge on Long Island, and cuts the ribbon on a new, state of the art bridge that will service the area for generations. Congratulations to the MTA LIRR for completing this project on time and on budget, the Village of Westbury for their tireless advocacy, and most importantly the community for their patience and persistence. The light at the end of the tunnel is finally here.”

Assemblyman Michael Montesano said: "The new and improved Ellison Avenue Bridge was long awaited by residents of the Westbury community. As a central route in Nassau County, it was critical to tackle this undertaking, and I am extremely appreciative of the hard work and commitment that has gone into this project.”

Nassau County Executive Edward Mangano said: “Replacement of the Ellison Avenue Bridge has helped improve our local quality of life for Westbury residents while increasing public safety for pedestrians and drivers alike. Nassau County is pleased to have assisted in this project and I thank Senator Martins and the LIRR for ensuring its completion.”

Nassau County Legislator Laura Schaefer said: “I am extremely pleased to see that the Ellison Avenue bridge is reopening. I want to thank Mayor Cavallaro and the Village of Westbury for seeing this project through with the LIRR as the bridge has needed this reconstruction for some time now and is a very important thoroughfare for so many residents of the Village of Westbury and beyond. “

Village of Westbury Mayor Peter Cavallaro said: “The condition of the Ellison Avenue Bridge has been a major concern for the greater Westbury community for several decades, and the replacement of the bridge was long overdue. The residents of the Village and surrounding communities are happy, relieved and grateful that this project has finally been completed, on time and on budget I am deeply appreciative to Senator Jack Martins for working hard to make sure that the LIRR finally undertook this important infrastructure improvement. I want to thank LIRR President Nowakowski and his staff for the open, transparent and efficient manner in which they conducted the project.”

The LIRR’s Ellison Ave. Bridge Replacement Project got underway in March 2015 when the Railroad closed and later demolished the old bridge. It promised a new span over the LIRR’s busy Main Line would be open to the public by April 2016 and that the work would proceed with as little impact on train service and the community as possible.

The weekend demolition last May and installation of a major portion of the new bridge in October by the contractor Posillico Civil Inc. of Farmingdale L.I., still makes for good viewing on You Tube and illustrates the advantages of the design-build process championed by Gov. Andrew Cuomo.

With the bridge back in service, Posillico still has two months of remaining work, including fencing, anti-graffiti proofing, grading & landscaping and utility connections. The road will remain open during the performance of this work, but will require occasional sidewalk or shoulder closures and lane shifts.

The original Ellison Ave. Bridge was a pedestrian overpass built by the Long Island Rail Road in 1896, then rebuilt as a two-lane roadway with sidewalks in 1941. In recent years, the structure and roadway had deteriorated significantly and the steel plates that covered the holes made for a bumpy ride.

The project, funded by the MTA Capital Program, is also important because 40 percent of the Railroad’s daily ridership passes along the Main Line Corridor.

Another innovative aspect of the project was that it was carried out under a unique Project-Labor Agreement negotiated by the LIRR and the Building and Construction Trades Council of Nassau and Suffolk designed to reduce labor costs while ensuring that jobs go to local construction workers.