577 passengers and 49 crew members were infected with a virus which left them suffering from diarrhea and vomiting. 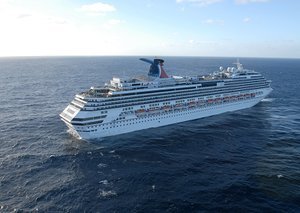 Those looking to get away on the Royal Caribbean cruise line, Explorer of the Sea, found themselves wanting to take a vacation from their vacation. The 10-day cruise will be returning home two days early after an outbreak of a gastrointestinal illness over the weekend. The illness ran ramped through 577 passengers and 49 crew members. The more than 600 people infected are said to have suffered from a hysteria of diarrhea and vomiting.

“The disruptions caused by the early wave of illness means that we were unable to deliver the vacation our guests were expecting,” the Royal Caribbean press release said. “After consultation between our medical team and representatives of the U.S. Centers for Disease Control and Prevention, we think the right thing to do is to bring our guests home early, and use the extra time to sanitize the ship even more thoroughly. We are sorry for disappointing our guests, and we are taking several steps to compensate them for their inconvenience.”

The cruise will return to port on Wednesday after starting the ill-begotten journey on January 21st. Once docked, a thorough “barrier” sanitization of the entire ship will be performed to ward off any traces of the virus. The CDC and Royal Caribbean stated that the sickness has dramatically lessened since it first ran like wildfire through the ship’s passengers and crew.

Doctors aboard the Explorer of the Sea say the symptoms were consistent with the norovirus. One reason as to why doctors predict the virus is because of how quickly people came down with diarrhea and vomiting. As of now they are awaiting further testing before confirming the diagnoses.

With just days before the ship returns home, any additional medical personnel and equipment will be flown to the ship’s 3,050 passengers and 1,165 crew members. Some of the supplies being dropped in will be used to sanitize the ship while at sea.