The staff of Wertheim National Wildlife Refuge (NWR) is excited to report that the nesting pair of bald eagles successfully fledged two eaglets this year. 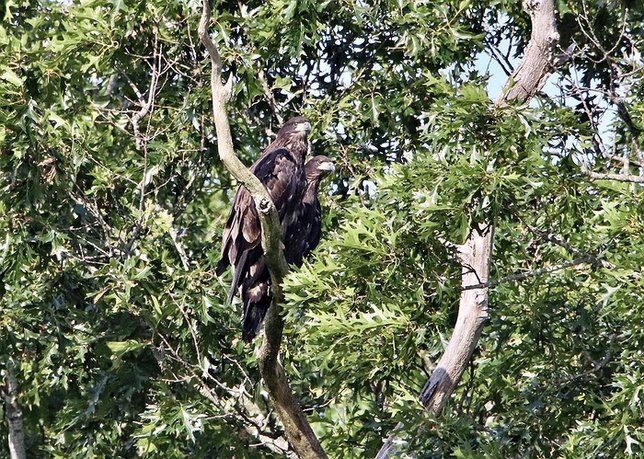 The staff of Wertheim National Wildlife Refuge (NWR) is excited to report that the nesting pair of bald eagles successfully fledged two eaglets this year. The refuge has now re-opened Little Neck Run to canoes and kayaks. Refuge staff thank refuge visitors and boaters for respecting the closure, which helped to reduce disturbance and protect the birds and their nest. Favorable locations to view eagles and other wildlife can be found along the Black Tupelo trail at Indian Landing and at refuge overlooks along the Carmans River, with the use of a spotting scope or binoculars. As always, visitors are reminded to obey closed area boundary signs and to adhere to refuge regulations.

Bald eagles reach sexual maturity at five years of age, when they obtain the characteristic white head and tail. They build large nests in tall trees and prefer undisturbed areas along the shorelines of rivers, marshes and large lakes. In the northern United States, eagles generally initiate nest building in December - January. Egg laying and incubation (33-35 days) can start in February and chick hatching and rearing takes place in March – May. Eaglets make their first unsteady flights 10-12 weeks after hatching and begin fledging in June – August. Juvenile (immature) bald eagles are very large bodied and mostly brown overall with white mottling under the wings. Bald eagles were removed from the endangered species list in 2007, but remain federally protected under the Migratory Bird Treaty Act and the Bald and Golden Eagle Protection Act. These acts help to ensure the safety of eagles and their parts (feathers, nests and eggs) from hunting, collection, harassment and other harmful actions.

Wertheim National Wildlife Refuge, established in 1947, is located along the Carmans River in Suffolk County, New York. The refuge protects one of the last undeveloped estuaries on Long Island. Wertheim was established to preserve habitat for migratory birds. Refuge management has expanded to also include the protection of federally threatened and endangered species, the conservation of native flora and fauna, and opportunities for wildlife-dependent public uses, where appropriate and compatible.

For further information, please contact us at 631-286-0485 or visit www.fws.gov/refuge/wertheim. The Visitor Center is open Monday through Saturday 8:00 a.m. - 4:00 p.m., unless otherwise noted closure for federal holidays or management purposes.