“Clybourne Park”—the wickedly funny and provocative play by Bruce Norris will be the third production of the Hampton Theatre Company’s 30th anniversary season. 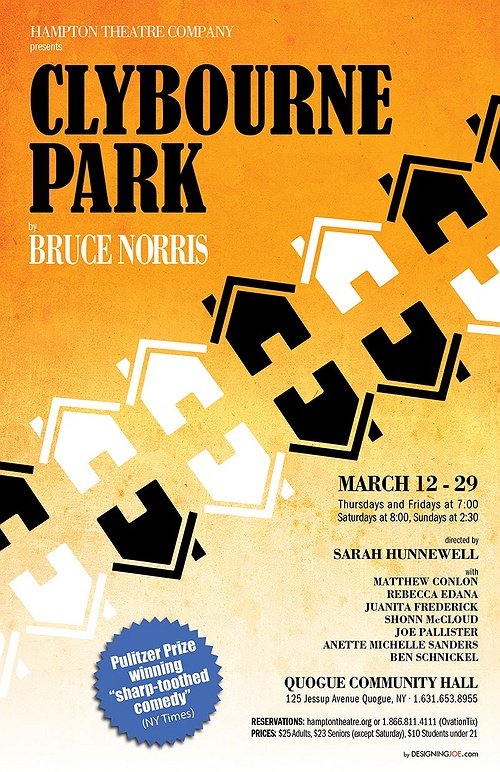 Quogue, NY - Febrauary 20th, 2015 - “Clybourne Park”—the wickedly funny and provocative play by Bruce Norris about how the different faces and shades of racism can make a straightforward real estate transaction anything but—will be the third production of the Hampton Theatre Company’s 30th anniversary season. The Pulitzer Prize and Tony Award-winning play opens on March 12th at the Quogue Community Hall and will run through March 29.

The two acts of “Clybourne Park” are in fact two separate plays set 50 years apart and spinning off Lorraine Hansberry’s landmark drama, “A Raisin in the Sun.”  With a cast of seven taking on different roles in the play’s two halves, act one is set in 1959, as nervous community leaders anxiously try to stop the sale of a home to a black family. Act two is set in the same house in the present day, as the now predominantly African-American neighborhood battles to stand fast against the onslaught of gentrification.

Calling the play, which won the Olivier and Evening Standard awards for its London production, a “sharp-witted, sharp-toothed comedy of American uneasiness,” Ben Brantley wrote in The New York Times that “the very structure of ‘Clybourne Park’ posits the idea of a nation (and even a world) trapped in a societal purgatory of ineptitude and anxiety.”

In his review of the 2012 Broadway production, Brantley goes on to maintain that the comedic elements of the play derive from “the eternal and undeniable satisfactions of watching supposedly civilized people behaving like territorial savages.”

The cast of “Clybourne Park” features four Hampton Theatre Company veterans and three newcomers. Matt Conlon was most recently on the Quogue stage in the fall in the role of Ellwood P. Dowd in “Harvey,” following his turn in the title role in “The Foreigner” last March. Joe Pallister, who also appeared in “The Foreigner,” was last on the Quogue stage in last spring’s production of “God of Carnage.”

Ben Schnickel is familiar to Hampton Theatre Company audiences from “The Foreigner,” as well as “The Drawer Boy,” “Becky’s New Car,” and “Rabbit Hole.” Returning to the Quogue stage for the first time since her appearance in “Desperate Affection,” Rebecca Edana first appeared with the HTC in the company’s revival of “Bedroom Farce.”

Rounding out the cast and trailing extensive lists of New York and regional credits are Juanita Frederick, Shonn McCloud, and Anette Michelle Sanders.

Playwright Bruce Norris is the author, most recently, of “Domesticated,” which premiered at Lincoln Center in November 2013. His play “The Low Road” premiered in London at the Royal Court earlier in 2013.

"Clybourne Park" runs at the Quogue Community Hall from March 12 through 29, with shows on Thursdays and Fridays at 7, Saturdays at 8 and Sundays at 2:30. The Hampton Theatre Company will again be offering special dinner and theater packages in collaboration with the Southampton, Westhampton Beach, Hampton Bays and Quogue libraries. Information about the dinner and theater packages is available on the company website, or through the libraries.