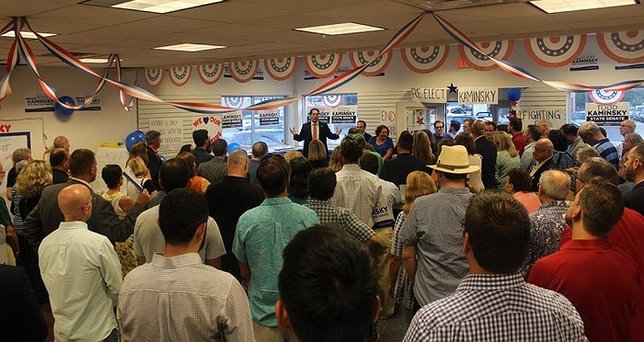 Rockville Centre, NY - September 9, 2016 - Last night, former federal prosecutor and State Senator Todd Kaminsky officially opened his brand-new Rockville Centre Campaign HQ and kicked off his re-election campaign. Surrounded by hundreds of supporters and of dozens of local community leaders, Kaminsky stressed the importance of his fight against higher taxes and the urgent need to end corruption in Albany.

Speaking before a full house, Senator Todd Kaminsky said: “The South Shore needs a voice that will stand up for our priorities: against tax increases, for fully funded schools, and to finally clean up Albany once and for all. Since my first days serving in the legislature, I have kept my promise to fight for Long Island - first and foremost. That’s why I voted against over 175 tax increases, increased funding for local schools by $20 million, and worked to ban convicted politicians from receiving their taxpayer funded pensions. Albany politicians have put their own personal interests before their communities for too long and it’s past time we put our neighborhoods first.”

“I’m running for reelection because there is more work to be done,” Kaminsky continued. “The corrupt special interests in Albany are still standing in the way of meaningful ethics legislation - blocking efforts to reform our campaign finance system, ban outside income for legislators, and empower local DAs to fight corruption. We need real reform and we need it now. I’m proud to have consistently fought for these critical issues and I will not back down until our community gets the honest government it deserves.”

November’s election for State Senate features a rematch between Senator Kaminsky and Chris McGrath, whom Kaminsky beat in April. As of the July campaign finance filing, Kaminsky had $347k on hand while McGrath had $50k on hand.

In April, 2016, Todd won a Special Election to replace Dean Skelos and immediately began serving the South Shore in the State Senate. During his time in the Senate and State Assembly, Todd fought for and won ethics reforms, one of the largest middle class tax breaks in state history, aid for Sandy victims, and a historic $20 million increase in funding for South Shore school districts.