This will be the legendary demonstration squadron’s fourth appearance at the show. 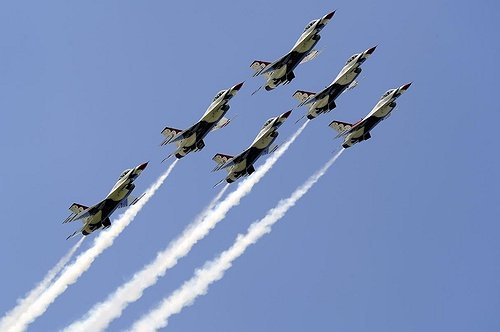 Bethpage, NY - December 29, 2014 - Bethpage Federal Credit Union, New York State’s largest credit union, and the New York State Office of Parks, Recreation and Historic Preservation, are very pleased to announce that the United States Air Force Thunderbirds will headline the 12th Anniversary Bethpage Air Show at Jones Beach taking place on Saturday, May 23, 2015 and Sunday, May 24, 2015.  This will be the legendary demonstration squadron’s fourth appearance at the show.

“Over 360,000 spectators chose the Bethpage Air Show as their Memorial Day holiday weekend destination in 2009, when the Thunderbirds last visited. We are confident that their return to Long Island in 2015 will draw in a sizeable crowd as well,” said Linda Armyn, Senior Vice President of Corporate Strategy, Bethpage.

“Memorial Day weekend is an important time to honor the men and women of our country’s military, which is exactly what the Thunderbirds demonstration squadron is all about – to honor and share the story of our nation’s military who have served and currently serve at locations around the world,” Armyn continued.

The Thunderbirds were formed in 1953, and since have been charged with demonstrating the professionalism of Airmen and the capabilities of modern airpower.  Their performance at the Bethpage Air Show will include approximately 40 maneuvers, featuring formation flying and solo routines.

Bethpage Federal Credit Union is a not-for-profit financial cooperative, existing solely to serve its members and has experienced rapid growth in recent years to become a strong alternative to banks.  Bethpage was approved for the largest federal community charter in the U.S. in 2003 and now is New York State’s largest credit union and Long Island’s primary community financial institution with 245,000 members, 30 branches and 60 shared service center locations throughout Nassau and Suffolk Counties. As a financial cooperative, Bethpage offers the best-in-market rates, low fees and world-class service, and a full menu of personal and commercial financial services.