The Jack Link’s Screamin’ Sasquatch will be making it’s second ever flight performance at the 2014 Jones Beach Air Show this Memorial Day Weekend! 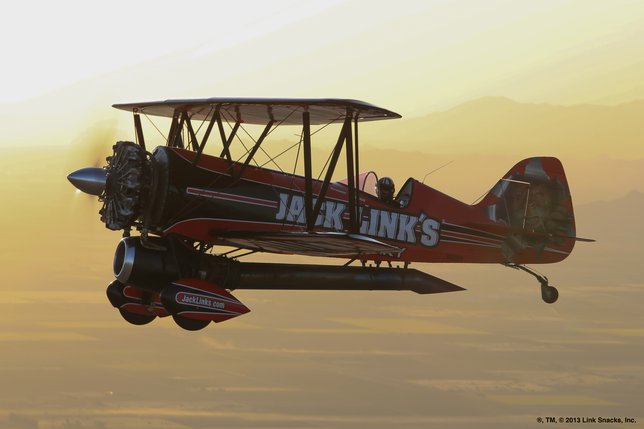 The U.S. Navy Blue Angels may have been absent from last year’s Air Show at Jones Beach due to budget cuts but locals will be in for quite the ride at this year’s show. Not only will the Blue Angels be returning to headline this year’s Air Show but there is a new and exciting entry to the line up - the Jack Link’s Screamin’ Sasquatch.
The Screamin’ Sasquatch was able to be brought to life through a partnership between Jack Link’s and John Klatt Airshows. The aircraft made its inaugural flight at the Rhode Island Air Show held Saturday, May 17th and Sunday, May 18th at the Quonset State Airport in Rhode Island.
“It was by the far the most crowd pleasing aircraft there,” said Jeff Boerboon who will be piloting the aircraft.
Boerboon has been part of the John Klatt Airshows team for three years. He began flying in 1988 after he attended the aviation program at the University of North Dakota. His love for airshows sparked when he was only five or six years old after attending the Oshkosh Air Show. In 2010, Boerboon received the U.S. Unlimited Aerobatics Champion title. For the past three years, Boerboon has been a member of the John Klatt Airshows.
John Klatt has served for the U.S. National Guard for over 20 years flying combat, air support and humanitarian missions throughout the world in the F-16 "Fighting Falcon," the C-130 "Hercules" aircraft as well as his own Air National Guard MX-S.
Boerboon and the rest of his team have been training with the airplane all winter and fine tuning its systems. The Screamin’ Sasquatch first started as a new project that has been sitting around. In the last 13 months, the John Klatt Airshows Team have been working on the aircraft in preparation to put on an exhilarating show.
Today, it is a one of a kind plane and will be making its second performance flight at the 11th Anniversary Bethpage Air Show at Jones Beach. This revamped 1929 taperwing waco civilian aircraft has been redesigned not only to allow the plane to fly at airshows but to accommodate for a 985 radial engine with a propellor - a bigger engine not found in any other 1929 plane.
In addition, the Screamin’ Sasquatch also has a CJ610 (J85) Jet Engine which can triple the amount of available power. It is capable of traveling up to 250 mph and a total power thrust that exceeds the weight of the plane. With 4,500 pounds of thrust, the aircraft can hover in the air and fly vertically similar to that of a helicopter. The power to weight ratio is 1 to 1 which allows the aircraft to accelerate going straight up for those vertical climbs. It can also perform aerobatic flights such as flat-spins, snap rolls and torque rolls.
The plane is also equipped with 24 gallons of smoke oil which makes the air show smoke. The oil is pumped directly from the tank to the exhaust system.
“They are gonna get a one of a kind experience. They will not see anything like it,” Boerboon said.
In order to transport the aircraft from one location to another, the plane is disassembled to fit in a 53 foot semi-truck which hauls the plane show to show and is reassembled at the new show location. Prior to taking off, the jet waco undergoes numerous safety checks.
With two different fuel systems and two different oil systems, it is critical that preparations are done in an appropriate manner.
Dell Coller, the aircraft’s principal mechanic and Crew Chief for the Screamin' Sasquatch Team, ensures the plane is ready to fly before a show by checking the fuel systems, fueling the plane with the proper fuels and oils, and ensuring the safety of the pilot - a process that can take up to an hour.
“I don't let anyone fuel and service the airplane other than Dell,” Boerboon said.
The Screamin’ Sasquatch was inspired by the Jack Link’s Beef Jerky Brand, a top food supplier for the U.S. Armed Forces, and the “messing with Sasquatch” commercials. The plane has a “Feed Your Wild Side” attitude and even has the motto written on the plane. Sasquatch himself is even featured on the tail of the plane.
“Flying this jet waco brought out a wild side of me I never knew I had,” Boerboon said.
The Air Show will run on Saturday, May 24th and Sunday, May 25th from 10 AM to 3 PM in celebration of Memorial Day. Admission for the show is free to the public but visitors will be charged $10 per vehicle for parking. However, those who carry the NYS Empire Passport will enjoy a free entry into the beach. The passport allows for unlimited access to New York State parks, beaches and recreational facilities.
“We would like to spend the weekend and take a moment to pay homage to all the men and women who have made the ultimate sacrifice to our country.”
Photos Courtesy of Link Snacks, Inc