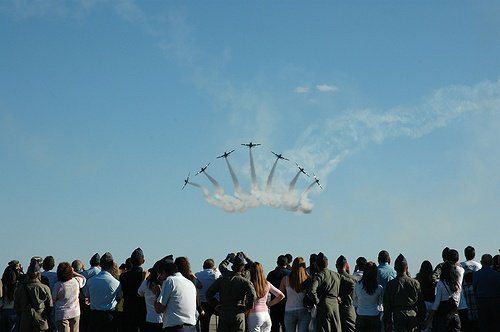 Wantagh, NY - December 22, 2014 - U.S. Senator Charles E. Schumer today announced that the United States Air Force (USAF) has committed to bringing the Thunderbirds back to the 2015 Bethpage Air Show at Jones Beach over Memorial Day weekend. Federal budget cuts, part of sequestration, prohibited the Air Force from fulfilling its scheduled performances in 2013. However, while the Blue Angels returned to the Air Show in 2014, after a one-year hiatus, the Thunderbirds flying team had yet to schedule a performance. With the squadron’s notable absence at the Air Shows since 2011, Schumer led a campaign through both letters and phone calls to have the Thunderbirds return to Long Island for this annual tradition. Schumer today announced that the Thunderbirds will return to the Air Show.

“The Thunderbirds performance is the cherry on top when it comes to the Jones Beach Air Show and I’m pleased that the U.S. Air Force has committed to bringing them back in 2015,” said Senator Schumer. The Air Show is one of the greatest events on Long Island and now with the return of the Thunderbirds, I am especially looking forward to next year’s event.”

Historic Jones Beach State Park is the most popular and heavily visited beach on the east coast. Each year, approximately 6 million people visit the park. Built in the 1920s, under the Robert Moses administration, the park gained an outdoor theater, a two mile boardwalk and iconic art deco bathhouses and structures.

A copy of Schumer’s original letter is below:

I am writing to request that the United States Air Force Thunderbirds participate in the Jones Beach Air Show in New York in 2015. For the past 11 years, thousands of people have gathered to watch the annual Jones Beach Air Show, featuring aerial demonstrations from all four branches of the service, both past and present, along with an impressive array of civilian acts, parachute teams, and static displays.

With over 350,000 people expected to attend this iconic Long Island Memorial Day event next year, it would be an honor to have the USAF Thunderbirds participate in the 12th annual Jones Beach Air Show. Every year, the Thunderbirds put together spectacular aircraft performances for the public, demonstrating the precision, flight skills, and aerial capabilities of members of our nation’s Air Force. Events such as this, with the history, support, and attendance volume of Jones Beach, help connect the general public with the servicemen and women of whom they are so proud and provide a great kickoff to the summer season.

I look forward to you strongly considering this request. Please do not hesitate to contact me if I can be of any assistance.