The wins come too late in the season to do the Jets and Giants much good, but New York was treated to a rare day full of victories yesterday. 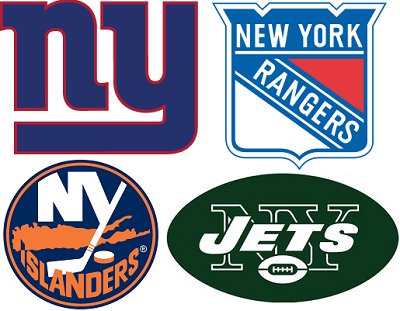 Giants Eliminate Lions
At 5-9 on the season the Giants had little to play for heading into yesterday’s game in Detroit, but coming off a humiliating 23-0 defeat at the hands of the Seahawks the team was hoping to find some measure of redemption by playing spoiler to the Lions.

The Giants had just one possession in the first quarter, and they used it to march down the field from their own 8-yard line. An 18-yard pass from Eli Manning to Jerrel Jernigan put them just outside the red zone, and Josh Brown kicked a 41-yarder to put them on the board first.

The Lions responded with a field goal of their own to finish a drive which bridged the first two quarters, tying the game 3-3. After a New York three-and-out, the Giants got the ball back at midfield when Reggie Bush fumbled and Antrel Rolle recovered. Manning connected with Hakeem Nicks for 12 yards and Andre Brown for 14 before throwing a 20-yard touchdown pass to Jernigan.

Detroit’s next drive ended in another turn over when Matthew Stafford was picked off by Justin Tuck late in the second quarter. Josh Brown kicked a 52-yard field goal to close out the half with the G-Men up 13-3.

What was shaping up to be a one-sided game became much more competitive in the second half. After the Giants started the third quarter with a three-and-out, Jeremy Ross gave the Lions a huge boost with a 50-yard return that gave them possession at the Giants’ 30. Detroit quickly converted the opportunity into a touchdown, and the New York lead was cut to 13-10.

Following a couple unsuccessful drives, the Giants found themselves pinned down at their own 12-yard line. Andre Brown ran for a loss of 3 before Manning was sacked in the end zone for a safety, giving the Lions 2 points and possession. Their ensuing drive ended with a touchdown and Stafford connected with Fauria for a two-point conversion, giving them a 20-13 lead as they scored 10 points in about four minutes of play.

Big Blue struggled to get its offense going into the fourth, but with five minutes to play Will Hill picked off Stafford and ran it back 38 yards for a touchdown to tie the score at 20-20. The Giants would have an outside shot at ending the game in regulation when they retook possession in the last minute of the fourth quarter, but a Manning pass intended for Jernigan near the Lions’ 25 was intercepted by Glover Quin, effectively sending the game into overtime.

The Giants had a golden opportunity to put a quick end to OT after Michael Cox returned the opening kick 56 yards out of the end zone to the New York 49-yard line. Eli threw a short pass to Brandon Meyers who took it 15 yards to the Lions’ 36, but on the second play of the drive Andre Brown coughed up the ball at the end of an initial 7-yard run.

New York’s defense mustered a stop against the Lions, and the team started its second overtime possession from its own 28. A 26 yard pass to Reuben Randle put them at the Lions’ 45, but a holding call backed them up 10 yards on second down, and they were unable to convert on third. With little to lose, the Giants decided to go for it on 4th and 7, and Eli connected with Jenrigan for 15. A few short plays later Josh Brown was on the field to try to notch a win, and a 45-yard field goal gave the G-Men a 23-20 victory, squashing the Lions’ playoff hopes.

Manning went 23/42 for 256 yards, a touchdown, and an interception. Andre Brown led in rushing with 40 yards on 16 carries, and Jernigan led receivers with 80 yards and a TD on 6 catches.

The Giants will end their season at home against Washington at 1:00 PM next Sunday.

Jets Top Browns
After losing to the Panthers last week, the Jets were eliminated from the playoff hunt by a Raven win on Monday night, and looked like a team defeated in the early going of yesterday’s game against the Browns. Cleveland took the only points of the first quarter with a field goal, and jumped ahead 10-0 in the second on a four-play drive.

Gang Green did not even cross midfield until late in the second quarter, but a 21-yard run by Chris Ivory got them deep into Cleveland territory. Geno Smith threw a short pass to David Nelson for the first Jet touchdown of the day, and the spread was cut down to 10-7. With just over a minute to go, New York’s defense forced a quick three-and-out, giving the ball back to Smith and the offense with 34 seconds left in the half. Bilal Powell ran 39 yards to the Browns’ 43 on the first play of the drive, and after a couple of passes Nick Folk kicked a 21-yard field goal to send the game into halftime tied at 10 apiece.

A scoreless third quarter quickly gave way to a second end zone connection between Smith and Nelson early in the fourth. The Browns responded with a field goal on their next possession, but the Jets slugged it out to get right back into the red zone. After six minutes of game time and 13 plays, Geno Smith scrambled across the last 17 yards of the field to pick up a rushing touchdown and give the Jets a 24-13 lead.

Cleveland could not score on their next possession, and New York took a knee to end the game in a victory.

Geno Smith threw for 214 yards and two touchdowns on 20/36, and ran for 48 yards with an additional rushing TD. Ivory led in rushing with 109 yards on 20 carries, and Jeremy Kerley led receivers with 70 yards on 5 catches.

The Jets will finish the season in Miami at 1:00 PM next Sunday.

Rangers Run Wild
The Rangers pulled themselves fairly high into the rankings after getting off to a slow start on the road this season, but their extended home stand has seen them sink right back down. Last night’s game against the Wild got off to a disappointing start when Jason Pominville tipped in the first goal of the game four minutes into the first, putting Minnesota up 1-0, but Benoit Pouliot returned the favor during a power play 12 minutes later.

Carl Hagelin broke the tie on a wrist shot midway through the second, and Mats Zuccarello slapped in another Ranger goal in the last 90 seconds of the period; New York took a 3-1 lead into the third.  Chris Kreider made the spread all but insurmountable with 7:14 to go in the third on a breakaway wrist shot; the momentum from a swift trip across the ice had more to do with sending the puck into the back of the net than did any actual shot.

The game ended by a final of 4-1, as Cam Talbot stopped 24 of 25 shots. The Rangers will finish their 8-game home stand at 7:00 PM tonight against the Maple Leafs.

Islanders Again Fall Short
The Islanders have not had much to celebrate this season, but a 5-3 victory over the Rangers on Friday gave them a boost which seemed to have carried over into the early going of Saturday’s bout with the Ducks.

Thomas Vanek snapped in the first goal of the night midway through the first, furnishing New York with a lead that lasted well into the second period. Anaheim tied the score briefly with a Ryan Getzlaf wrist shot late in the second, but just over two minutes to go in the frame Vanek knocked in his second goal on an unassisted slapshot. Frans Nielsen had New York up 3-1 with an assist from Josh Bailey and Thomas Hickey less than a minute later.

Getzlaf cut the spread back down to 1 seventy seconds into the final period. The Islanders hung on to the lead for nearly nine more minutes, but the Ducks were able to tie the score at 10:32, and pulled ahead three minutes later when Kyle Palmieri scored on a Getzlaf assist. Getzlaf put the final nail in New York’s coffin in the last 30 seconds, getting the hat trick off an empty netter, and giving the Ducks a 5-3 win. Evgeni Nabokov stopped 26 of 30 shots in the loss.

The Islanders, who remain in last place with 27 points, will play the Red Wings next at 7:30 PM tonight.

Knicks Sluggish on Saturday
The Knicks had two days off before their Saturday run-in with the Grizzlies, but having to get up to play a noontime game evidently did not agree with them. After falling behind 17-8 late in the first quarter the team was able to rally back, entering the second down by just 3.

JR Smith and Tim Hardaway Jr. combined to put New York up 28-25, but the Knicks began to look rather sluggish afterwards. An 8-2 run would soon put Memphis ahead 42-35, and the Grizzlies entered the half with a 10 point spread, leading 50-40.

The Grizzlies’ lead hovered around ten points for much of the third quarter; New York tried to chip away at it several times, but never quite managed to catch up before Memphis struck back. Memphis’ advantage grew to as much as 19 in the fourth before a couple of lopsided runs brought the Knicks back within four points; however, with only 25 seconds left to go the Grizzlies were able to stave off New York and dealt a finishing blow with four straight points of their own. The Knicks lost 95-87.

Carmelo Anthony posted 30 points on 50% shooting from the field in the defeat. Hardaway and Smith both scored 16, and Tyson Chandler had 6 rebounds alongside 8 points in his second game back from injury.

The Knicks will play the Magic next, at 7:00 PM tonight, before hosting the Thunder at 2:30 PM on Christmas.