The Islanders, Rangers, and Nets all suffered overtime losses this week, though the Knicks edged out the Bucks in a game that went to double OT. 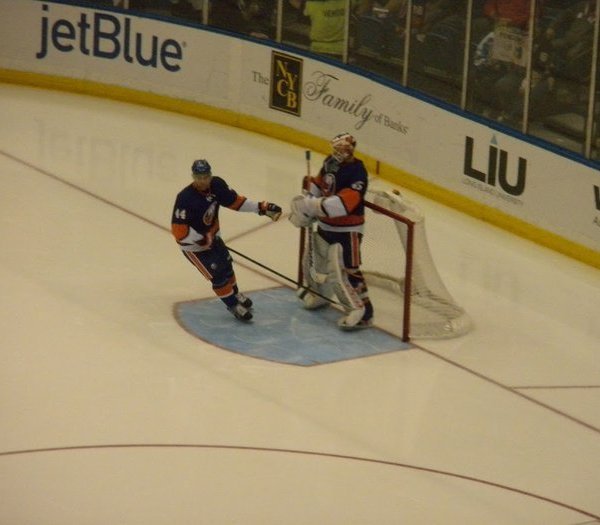 Islanders vs. Lightning
The Islanders looked to be in line for a much needed win against Tampa Bay on Tuesday. Following a scoreless first, Kyle Okposo slapped in the first goal of the night 11 seconds into the second period. New York’s lead doubled 10:21 through the third with a Frans Nielson wrist shot, but seven minute later Valtteri Filppula put the Lighting on the board.

It seemed as though New York would hang on to win, but with only four seconds to go Filppula tied the game. Neither team could score in the OT period, but Filppula led the ensuing shootout off with another successful shot. Before long, Tampa took a 2-1 win in the shootout and hand the Islanders yet another loss.

Evgeni Nabokov stopped 34 of 36 shots before the shootout.

Rangers vs. Penguins
The Rangers have been having a rough go of their extended home stand, winning just one of the first five games. They hoped to return to winning form on Wedneday, but would have to go through the Penguins to do so.

Pittsburgh struck first on a power play 12:44 through the second period, but Carl Hagelin backhanded in the tying goal three minute later. The Penguins pulled ahead again 5:25 into the third, and a minute later Brandon Sutter had them up 3-1.

Mats Zuccarello cut it back to a one-goal game with just over 7 minutes to go, and a power play in the final two minutes gave Derick Brassard the opportunity to tie the score at 3 apiece. The game went into overtime, and then to a shootout. Four-and-a-half frames passed before Brandon Sutter gave Pittsburgh a 1-0 shootout victory. Henrik Lundqvist stopped 29 of 32 shots on the night.

Islanders vs. Rangers
With both of New York’s teams on a serious downturn, one of them was guaranteed a now rare victory last night. The Islanders took the first lead of the evening when Cal Clutterbuck knocked in a penalty shot 14:42 through the first period. The lead grew to 2 when Michael Grabner scored an unassisted shorthanded goal with 2:51 to go in the frame.

30 seconds later Benoit Pouliot was able to take advantage of the Ranger power play to make it 2-1, and three minutes into the second Derek Dorsett slapped in the tying goal. Another power play allowed Derek Stepan to give the Rangers a 3-2 advantage nearly five minutes afterwards. Brian Strait retied the score midway through the period.

The Islanders were able to pull ahead on their own power play early in the third thanks to Thomas Vanek, and Grabner cemented their victory with a last-minute empty netter. Nabokov stopped 21 of 24 shots in the 5-3 victory; Lundqvist blocked just 15 of 19.

Nets Blow Out 76ers, then Get Edged Out in Philly
The Nets started the week on a real high note, hosting the 76ers for a Monday night game which Brooklyn led in its entirety. Kevin Garnett dropped the first bucket of the day, and the Nets were soon off to a 7-0 spread; by the end of the first quarter they were up by 10, 32-22.

Keeping pace was all Philadelphia could do in the second quarter—they were actually down 58-40 before scoring 8 straight to enter the half down 10 points yet again. The third quarter—which has traditionally been Brooklyn’s downfall this season—saw the Nets explode. Joe Johnson did most of the work, sinking 8 threes en route to a 29-point quarter during which Brooklyn increased its lead to 100-73. They added a little salt to Philly’s wounds in the fourth, taking a 130-94 win.

Johnson had a game high 37 points, and Andray Blatche backed him up with 20. Paul Pierce shot for 14, Alan Anderson put up 13, and Mirza Teletovic contributed 11. Deron Williams posted a double-double on 13 scoring and 13 assists.

Unfortunately Johnson and the Nets were not quite so dominant when the Wizards came to town on Wednesday. Garnett again put up the first points of the night, but this time the Nets struggled to hold a lead afterwards. By the time the first quarter drew to a close they were down 30-28. The second quarter followed much the same pattern until Washington went on a 9-2 run which spurred them into a six-point halftime lead.

The Wizards stacked a couple more points onto their lead in the third, heading into the third up 85-77. Brooklyn was finally able to outscore Washington for a frame in the fourth, but it was by far too little and came too late; they lost 113-107.

Paul Pierce led in scoring with 27 points, followed by Brook Lopez with 22. Joe Johnson scored 20, Williams had another double-double on 15 points and 13 assists, and Blatche shot for 12.

The Nets played the 76ers again last night, this time on the road in Philadelphia and without the benefit of a game-long lead. Philly actually led 19-10 before a pair of Teletovic threes put Brooklyn back on the right track and helped his team take a 31-29 lead into the second.

Philadelphia quickly retook the lead in the second and the two spent the quarter continuously tying, breaking ahead, and retying the score until the 76ers knocked in the last 4 points of the period to go into halftime up 60-57. Brooklyn started to pull ahead for a brief stretch in the third, going up 81-73, but Philly ended the quarter with a 9-2 run to close within a point at the end of the quarter.

The fourth progressed in much the same fashion, with Anderson giving the Nets a 108-107 lead on a pair of free throws in the final minute. Even Turner hit one of two foul shots shortly afterwards, and neither team could score in the last 50 seconds, sending the game into overtime tied 108-108.

After a Paul Pierce 3 put the Nets up 115-113, the 76ers sunk 6 in-a-row, but Williams hit a jumper to end the run and Pierce knocked in another 3 to give the Nets a 120-119 lead. Philly got possession back in the waning seconds, however, and Turner put up a layup just before time expired; the ball bounced around after the buzzer sounded, then fell in to give Philadelphia a 121-120 victory on a night that featured 31 lead-changes and 21 ties.

Anderson led the Nets with 26 points, backed up by Pierce’s double-double on 24 points and 10 rebounds. Lopez scored 22, Teletovic put up 18, and Williams rounded out the starting five with 17 points.

Brooklyn will face an even stiffer challenge when they host the Pacers on Monday at 7:30 PM.

Knicks Thankful for Chandler’s Return
The Knicks are still a long ways off from playing .500 ball, but in a weak Eastern Conference and even weaker Atlantic Division they have been slowly improving this month. Monday’s game against the Wizards was poised to be another setback, however, as Washington went on an 8-0 run late in the first quarter en route to a 26-21 advantage. The lead only grew in the second; after a brief New York rally the Wizards went back to work, taking a 53-42 spread into the half.

Washington’s lead burgeoned to 15 in the third quarter before Carmelo Anthony and JR Smith began to cut into it. New York took command of the quarter, overcoming the deficit and even taking a two point lead into the final period. A tug-of-war ensued, drawing to a close as Bradley Beal knocked down a shot to put the Wizards up 102-101. There were 6.9 seconds left on the clock and the Knicks had a timeout, but Mike Woodson did not call it and Carmelo Anthony was forced to take an erratic three, which came up well short. New York lost by a point.

After that most recent loss, the Knicks witnessed the long-awaited return of Tyson Chandler on Wednesday night. His defensive presence would prove vital, as the Knicks and Bucks traded blows throughout the game.

Neither team established a substantial lead in the first quarter and, even after New York pulled ahead by 9 in the second, Milwaukee was able to come right back. By the time halftime rolled around, the Bucks had pulled within a point, trailing 45-44.

The two continued to trade leads through the third quarter, which New York came out of up by only two, and the fourth followed much the same pattern until an 87-87 tie was left at the end of regulation.

The Knicks held a 94-92 lead the majority of a low scoring overtime period, but after Chandler shoveled the ball to Bargnani off a rebound with 16 seconds to go, Bargnani took an entirely unnecessary shot. He missed, the Bucks recovered, and a Henson tip shot tied the game at 94 apiece, forcing a second OT.

Milwaukee held the lead again briefly, but Anthony took control and put up 8 points in the short period, giving New York a 107-101 win.

Carmelo led the team with 29 points and 9 rebounds. Udrih shot for 21, Smith put up 19, and Bargnani posted a double-double on 12 points and 10 rebounds, Chandler scored 9 and rebounded 9 as well.

The Knicks will play the Grizzlies in an afternoon matinee at 12:00 PM today.