Construction will shut down service between Farmingdale and Ronkonkoma early Sunday morning, but there will be additional trains running on Tuesday. 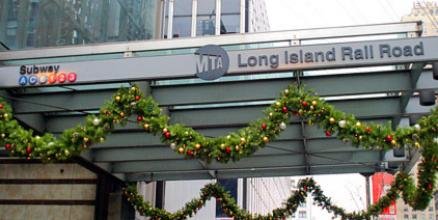 The MTA and LIRR have scheduled extra stops in preparation for the holiday rush this year, but before those trains leave the station on Christmas Eve weekend commuters can expect a temporary slowdown. Track work scheduled for Sunday, December 22 will force the Long Island Rail Road to cancel all stops between Farmingdale and Ronkonkoma.

Those looking to take the train will instead find busses waiting at each station along the route, adding a predicted 24 minutes of travel time for those heading east and 41 minutes for those who are westbound. Work is scheduled from 12:45 AM to 7:30 AM, limiting impact to only those hoping to catch a train in the early morning. The LIRR estimates that a total of roughly 2,000 customers will be affected.

After the relatively slow Sunday morning period, the LIRR will be ramping up activity with 13 additional eastbound trains added to its schedule for December 24. The extra trains well be leaving Penn Station between 12:46 PM and 3:48 PM on Christmas Eve.

The Ronkonkoma Branch will have extra departures at 12:46 PM and 1:38 PM, stopping at Woodside, Jamaica, Mineola, Hicksville, and Ronkonkoma.

Babylon’s branch will have six extra trains added. The 1:28 PM, 2:22 PM, and 3:31 PM will head to Rockville Centre before heading local to Babylon.  The 1:53 PM and 3:00 PM will stop at Jamaica and RVC, and the 2:32 PM will be making a stop at Lynbrook. A regularly scheduled 5:59 PM train will be cancelled, but evening commuters will be able to take the 6:05 PM to Merrick.

Port Washington will get an extra train at 3:40 PM with stops at Woodside, Flushing-Main St. and then makes all stops to Great Neck. Far Rockaway has an extra 3:48 train scheduled to go to Locust Manor, Laurelton, Rosedale, and Valley Stream before making all stops to Far Rockaway.

Christmas Day will also be following a special holiday schedule, available from the LIRR website, and ten extra weekend trains (four westbound and six eastbound) will be running until January 5.

[Source: The Metropolitan Transportation Authority]
Photo courtesy of the MTA.