The Jets and Giants both lost this week, though Sunday was much kinder to basketball fans on Long Island.

Having decided to bench Sanchez for the first full game since he came to the team, the Jets hung Sunday afternoon’s hopes on their third string quarterback, Greg McElroy.  McElroy had salvaged the only other NFL game he ever played by leading Gang Green to a fourth quarter touchdown against the Cardinals after he came in at the end of the game.

It looked as though the backup would continue his heroics early on against San Diego. After the Chargers got out to an early 7-0 start, Greg and the Jets battled back with an 83 yard drive that culminated in a Shonn Greene rushing TD. Greene promptly gave a repeat performance, putting New York up 14-7 at the end of the first.

Unfortunately, that marked the end of productivity for the Jet’s offense. San Diego knocked back a field goal in the second quarter, then two TD’s in the third when Philip Rivers connected with Alexander and Gates.  Nick Folk did put up a field goal in the fourth quarter, but it was too little too late as the Jets fell 27-17.

McElroy went a mediocre 14/24 for 185 yards and an interception. Blame for the team’s poor performance cannot be placed squarely on the QB, however, as the offensive line allowed him to get sacked 11 times and the running game only managed 69 yards.

Whether McElroy, Sanchez, or Tebow starts the season’s final game, the quarterback will have a hard time covering up the Jets’ other flaws.

Giants on the Verge of Collapse

The defending Super Bowl champs came into Baltimore with a seemingly simple task: win this week, and next, then return to the playoffs. Though the Ravens are a force to be reckoned with, they have had as many struggles this year as New York; it was not unreasonable to believe the Giants could come out on top.

Big Blue made anyone who did think they would win look foolish. Baltimore went up 14-0 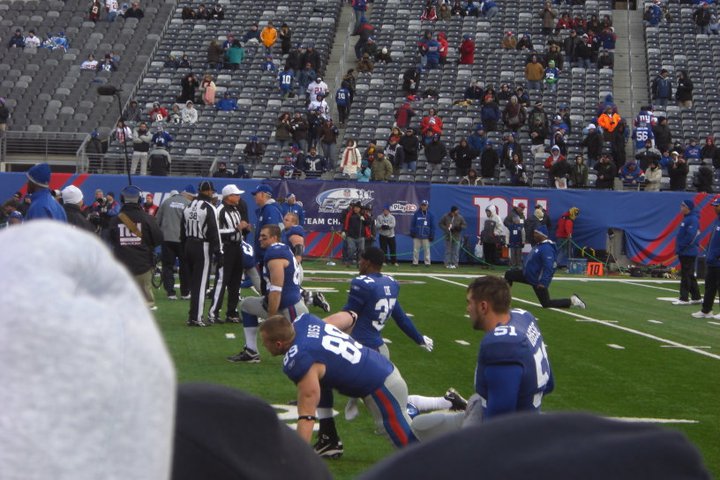 in the first quarter and, though the Giants cut the lead by 7 before the start of the second, the Ravens scored another 10 before the half. New York was held scoreless for an entire half of the game, failing to score once in the second or third quarter. They did muster one more TD in the fourth, but their fate was already sealed by that point; they fell 33-14.

Eli went 14/28 for 150 yards and a touchdown, while his counterpart, Joe Flacco, was twice as productive in going 25/36 for 309 yards and two TD’s. Coming back from injury, Ahmad Bradshaw ran for only 39 yards on 9 carries.

With this loss and last week’s 34-0 thrashing at the hands of Atlanta, the Giant’s playoff hopes are hanging by a thread. They can still make it in as a wildcard if they beat the Eagles next Sunday, but they will need the Vikings, Bears, and Cowboys all to lose for a victory to matter.

While the G-Men are hoping to defeat Philadelphia next Sunday, the Nets have already done just that. Coming off a loss to the Knicks and a long string of defeats, Brooklyn outscored the 76ers 24-17 in the first period.

Philly would cut the lead down to 2 before the end of the first half, but a 26-23 third in the Nets’ favor would provide just enough cushion for Brooklyn to come out on top, winning by a final of 95-92. Joe Johnson put up 22 points throughout the night, while Deron Williams had 16; Brook Lopez Gerald Wallace both scored 14.

Brooklyn will host the Celtics today at noon.

The second meeting between the Knicks and Bulls was chippy, to put it mildly. Carmelo Anthony was ejected from the game for arguing with a ref, followed by Coach Woodson for the same reason. Tyson Chandler and Joakim Noah were also removed from the game after a brief scuffle.

Aside from being on the losing side of the ejections tally, New York trailed 83-61 entering the fourth quarter. They would not go down quietly, however, as they rallied to score 45 points in the final period without their star player. It was an impressive quarter, but it was not enough to recover from such a large deficit; the Knicks lost 110-106.

Before being booted from the game, Carmelo Anthony had 29 points of his own. Felton scored 21, and JR Smith had a double-double off the bench, putting up 26 points and 10 rebounds.

Sunday’s game against Minnesota did not look like it would end much better for New York, as the team trailed nearly the entire night. Carmelo would not let his team fall so easily, though, as he went on a 12-point tear in the game’s waning minutes, including seven shots from the foul line.

19 of Anthony’s 33 points would ultimately come in the fourth quarter, as he rallied the Knicks to a 94-91 victory. JR Smith had 19 off the bench, while Chandler scored 16 and Felton 15.

The Knicks will be in LA to play the Lakers at 3 o’clock today.