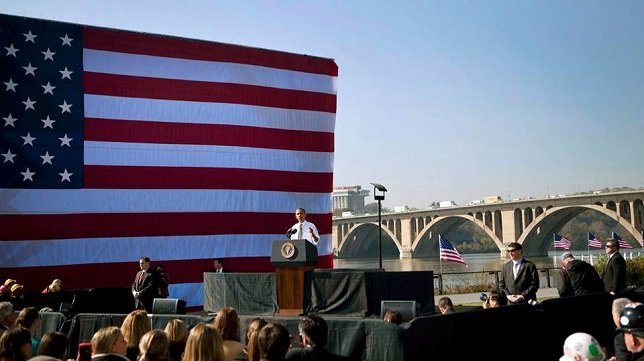 President Obama: The passing of the transportation bill "will help us build on America's progress by growing our economy and creating more good jobs for our middle class. This bill is not perfect, but it is a commonsense compromise, and an important first step in the right direction."

Washington, DC - December 4, 2015 - Senator Charles E. Schumer today announced, following years of work, major victories that will greatly help New York City were included in the 5-year federal transportation bill, the FAST (Fixing Americas Surface Transportation) Act that passed Congress late last night. Schumer said these victories – in addition to the restoration of 5340 High Density Funding – will boost the economy and improve New York City’s transit systems and infrastructure. The bill provides a total of over $16.3 billion in direct infrastructure spending to NY State over the next 5 years, $1.5 billion more than New York would receive in a flat-funded bill. That amounts to an average annual increase of over $300 million above current spending levels. Additionally, the bill creates a number of new large discretionary programs for which New York City and New York State will be able to compete for funding. In addition to this funding increase, under the FAST Act, NY State will also an increase in its relative share of transportation spending compared to other states; New York City will benefit largely because of these Schumer-backed provisions.

“There’s no doubt about it, major victories for the Big Apple’s roads, subways and bus systems were at the core of this bill. As a conferee on this major transportation bill, I am very pleased we restored funding for critical transit-funding programs the House of Representatives slashed, and that we increased overall transportation funding that will help New York City and the regional economy. The regional economy is the very heart of our nation’s economy and our transportation systems are the lifeblood that make it all possible. Investing to maintain and improve those transportation systems boosts our economy in the near- and long-term and that’s exactly what government should be doing to keep our improving economy humming,” said Schumer. “New York City straphangers can rest assured that this federal transportation bill provides the resources needed to make sure our subway and bus systems are on the right track.”

The bill includes the following victories for NYC:

The FAST Act includes a reversal of the Proposed Elimination of 5340 Funds New York City transit cuts.
During the negotiations on the five year transportation bill the House proposed eliminating funding for the High Density States, or 5340, Program. This important program provides over $100M annually to NYS. Schumer worked relentlessly during conference negotiations to reverse this destructive cut and thanks to Schumer's efforts the final transportation bill included the full restoration of this program.

The FAST Act includes a formula change in the FHWA Ferry Program that will increase funding for the Staten Island Ferry.
Schumer helped to fight for a change in the way that certain ferry formula dollars are distributed to place a higher emphasis on systems with a high volume of passengers. This change will nearly double the annual funding available to the Staten Island Ferry, bringing the total to around $6M a year.

The FAST Act includes a provision that makes off-system bridges eligible for federal funding
Schumer has been working since 2014 to increase federal funding for local bridge repair projects. The 7,464 local bridges across the state that are not on the federal-aid system (“off-system bridges”) have relied on 2009 funding levels to access federal dollars for maintaining and improving bridges. The FAST Act will ensure off-system bridges are now eligible to receive National Highway Performance Program (NHPP) funds, in order to increase the amount they can apply for and receive for bridge repairs. These additional dollars, combined with additional local input into how federal highway dollars get spent, will finally provide a path forward for local communities to begin repairing their aging bridges.

The FAST Act will include a brand new discretionary bus program
This transportation bill will create a new discretionary fund that municipalities can apply to, allowing them to access funds for replacing aging bus fleets. This program will be funded at an average of $300 million per year, each year for the next 5 years. Schumer made helping push for this program a priority, following countless meetings with New York State transportation leaders who had urgent bus funding needs. Schumer called this a win for upstate transit systems that have been struggling to shoulder the cost of replace aging fleets in recent years. Schumer’s efforts to help create this new bus program, combined with the successful restoration of critical 5340 funding, will be a major lift to transit agencies across New York State.

The FAST Act will also include the creation of a $4.5 billion Nationally Significant Freight and Highway Projects Program.
This program will be funded at $850 million per year in the first year and then increase to $1 billion by the final year of the five year bill. Under this new program, major projects throughout New York State will be able to compete for funding to address important transportation priorities. This program, which will be a discretionary grant program similar to the TIGER grant program, will help projects that are too big to get off the ground due to a lack of traditional funding take shape. Furthermore, this new program has a large rural set-aside that will help ensure projects in all regions of the state are able to compete for dollars.

The FAST Act will include Senator Schumer’s Safe Rental Car Bill
Since 2010, Schumer has been working to ensure car rental companies fix cars recalled because of safety defects before renting or selling to consumers. The bill would, for the first time, hold rental companies to the same standard as auto dealers, who are prohibited from selling a new car under recall unless the defect has been remedied. Senator Schumer pushed for the inclusion of this provision in the Senate passed DRIVE Act earlier this year and was able to ensure that the legislation was also included in the overall transportation bill.