Deployments This Week Coincide with Arrival of New York Utility Equipment and Vehicles in San Juan. 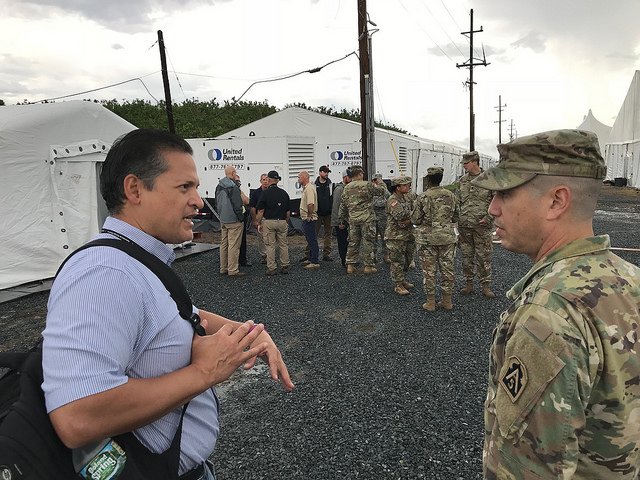 Albany, NY - November 28, 2017 - Governor Andrew M. Cuomo today announced the deployment of 72 additional New York State electric utility experts to Puerto Rico arriving today and tomorrow to assist with the ongoing recovery of Puerto Rico's power grid. The deployment coincides with the arrival of a barge loaded with an additional 55 utility vehicles and equipment docking at the port in San Juan. Under Governor Cuomo's direction, this week's deployment brings the total number of New York utility personnel involved in the power restoration effort to 457 along with approximately 330 New York utility vehicles and other power recovery equipment to assist with the island's restoration of power.
"From day one, we have put boots on the ground to help our brothers and sisters in Puerto Rico, and we remain committed to helping them during every step of the recovery effort," Governor Cuomo said. "With the addition of this deployment, we have hundreds of New York utility workers in Puerto Rico who are taking a hands-on role in helping repair the power grid and providing storm recovery expertise."
This latest wave of New York utility assistance responds to Puerto Rico Governor Ricardo Rosselló's request for utility mutual aid resources in order to accelerate the power restoration process on the island. New York utilities providing support include crews and experts from the New York Power Authority, National Grid, Con Edison, PSEG, Central Hudson Gas & Electric Corp, and AVANGRID.
This week's deployment builds on previous waves of mutual assistance from New York announced by Governor Cuomo on November 21, November 13 and November 2, including the NYPA-led, 28-member Tactical Power Restoration team that specializes in damage assessment of the power distribution system and a team of 15 who are assigned to help expedite the necessary filings for funding reimbursements with the Federal Emergency Management Agency.
The New York State utility workers are coordinating directly with the Puerto Rico Electric Power Authority in cooperation with the United States Army Corps of Engineers. In the immediate aftermath of Hurricane Maria, the initial teams of NYPA personnel assisted PREPA in triaging the damage and assessing virtually all of the island's 360 substations.
The arrival of New York's resources and personnel this week also complements two previous deployments of New York State assistance sent to Puerto Rico under Governor Cuomo's direction on September 22 and September 29.
Gil C. Quiniones, NYPA President and CEO, said, "On behalf of Governor Cuomo, NYPA is pleased to oversee New York State's utility response to this disaster. We are working every day with our Puerto Rican counterparts to repair the island's electrical grid and to help ensure that we rebuild the system making it stronger and more resilient."
National Grid New York President Ken Daly said, "Our team is eager to get to work restoring service to our neighbors in Puerto Rico, and supporting the mutual aid teams already gathered for this monumental effort. We appreciate Governor Cuomo's leadership in organizing a unified New York response."
John McAvoy, Chairman and CEO of Con Edison, said, "With this additional wave of power restoration teams from New York headed to Puerto Rico, Con Edison and Orange & Rockland Utilities will have over 250 employees and contractors on the ground there, helping residents and families rebuild their homes and their lives. Our women and men remain dedicated and committed to getting the job done."
Dan Eichhorn, President and COO of PSEG Long Island, said, "PSEG Long Island is proud to continue supporting Governor Cuomo's efforts to rebuild Puerto Rico's energy grid just as quickly and safely as possible. Our employees and contractors are acutely aware of how important mutual aid support can be during times of crisis and we will provide the assistance that is needed to help the people of Puerto Rico."
For more information about the recovery and relief efforts underway in Puerto Rico, and to learn how you can assist, please visit the Governor's Empire State Relief and Recovery Effort for Puerto Rico webpage.