Governor Cuomo signed two pieces of legislation relating to Superstorm Sandy and extreme weather. The first bill is designed to reform the insurance industry in New York State with regard to claims involving sewer issues ... 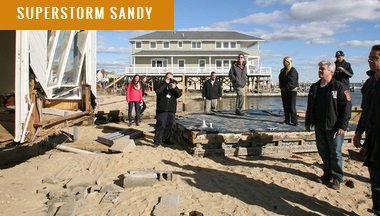 Albany, NY - October 29, 2015 - Governor Cuomo signed two pieces of legislation relating to Superstorm Sandy and extreme weather. The first bill is designed to reform the insurance industry in New York State with regard to claims involving sewer issues and flooding, and the second supports New Yorkers who made repairs to their homes after Sandy.

“In the three years after Hurricane Sandy, we have continued to rebuild New York in a way that is smarter, stronger and more resilient in the face of the increasing threat of extreme weather,” said Governor Cuomo. “These two bills do exactly that, by both supporting homeowners who are building back from the damage they experienced, and by making sure that insurance companies support those who are impacted. “

The first bill signed by Governor Cuomo is A. 453 / S. 1454, which pertains to “anti-concurrent causation” clauses in relation to homeowner’s insurance coverage for sewer backups. These clauses have been used to deny coverage whenever an excluded peril (such as flooding) directly or indirectly causes loss or damage, even if a covered peril contributed concurrently or in any sequence to cause the loss or damage.

This new law requires the Department of Financial Services to examine and make recommendations concerning the treatment of these clauses in relation to homeowner’s insurance coverage for sewer backup. The Superintendent of DFS must also submit a report to the Governor and the Legislature by January 1, 2017.

Senator Martin Golden, who sponsored S. 1454, said: "We all know that despite the fact that sewer backup insurance is very expensive, it does not allow for all claims. On this anniversary of Super Storm Sandy, I thank Governor Andrew Cuomo for signing this bill which will rightly afford more homeowners the chance to file insurance claims when they suffer losses. We have changed the law so that New Yorkers can now recover some of the financial loss they endure in the event of such an incident."

Assemblyman Steven Cymbrowitz, who sponsored A. 453, said: "With large storms hitting New York State becoming the new normal, insurance policies must evolve to adequately address the needs of homeowners. Many homeowners were denied damage coverage after Hurricane Sandy because insurance providers claimed no connection between the storm outside and the sewer backups inside. This legislation will ensure that the State can properly direct insurance companies to provide the coverage when concurrent damage occurs and, in the future, prevent denial of coverage."

Governor Cuomo also signed A.7156 / S.5800, which will authorize Nassau County to adopt tax relief that would mitigate the cost of increased assessments.

In the aftermath of Superstorm Sandy, many homeowners engaged in extensive repair or reconstruction of their homes to repair damage. As a result of these repairs, assessments for many of these homeowners have increased substantially – even if the homeowners only restored their buildings to the condition existing prior to the storm.

The new law will provide tax abatements to offset assessment increases attributable to the storm. Additionally, local assessors would be prohibited from considering storm-related construction when determining taxable assessed value through 2020. The bill would take effect immediately.

Senator Michael Venditto, who sponsored S. 5800, said: “I am proud to be the Senate sponsor of this legislation that will assist our superstorm Sandy victims and allow them to repair and rebuild. It’s been three years, and many residents are still struggling to get back into their homes and on with their lives. Assemblyman Kaminsky and I, have in a bipartisan manner, worked together to get this bill passed in both houses. On behalf of all of our constituents, I would like to thank Governor Cuomo for signing this bill into law.”

Assemblyman Todd Kaminsky, who sponsored A. 7156, said: “The legislation I authored provides immediate tax relief to superstorm Sandy victims who were forced to repair their homes after severe damage,” said Assemblyman Kaminsky. “After one of the worst natural disasters in New York State history, residents should not be slammed with a higher tax bill as a direct result of repairing their homes after superstorm Sandy. Here we are, three years later and it is simply unfair that families continue to struggle. This law will provide much-needed relief for residents in Nassau County and I thank Governor Cuomo for signing this important bill into law.”