Giants Win, Jets Lose as Neither Team Manages a Touchdown

The Giants lived and the Jets died by the field goal yesterday. The Rangers beat Detroit and the Islanders fell to Philly on Saturday. 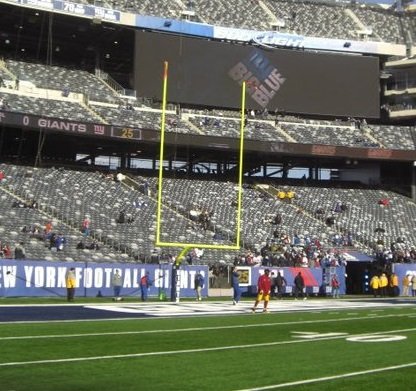 Giants Kick Over the Eagles
The Giants won a game which could be described as anything but pretty for their first win of the season against Minnesota on Monday night. They entered Sunday looking to gain some ground in the NFC East against their division rivals in Philadelphia.

After starting the afternoon with a quick three-and-out, Eli Manning led his team into field goal territory on a drive highlighted by a 22 yard pass to Hakeem Nicks and an 18 yard connection with Victor Cruz. Josh Brown knocked back a 40 yard field goal to put New York on the board first. A 27 yarder to Brandon Myers to kick off their next possession helped set up a 44 yard field goal to put the Giants up 6-0 in the first quarter.

A 9-play New York drive which bridged the first two quarters ended in a third straight FG for Big Blue, this time from 33 yards out. A series of short gains on their next possession set up yet another field goal, putting the Giants ahead 12-0. Michael Vick, who has been ailing since his last run-in with the G-Men, left the game on Philly’s ensuing drive, handing the reigns over to Matt Barkley. The third stringer had no more success than did the Eagles’ starter, ending his first possession with a sack-fumble at the hands of Terrell Thomas.

The third quarter was an unproductive one for both teams, but a drive which started at its end led to a fifth Giants field goal early in the fourth, putting New York up 15-0. Big Blue would not score again and Barkley could not accomplish much with the opportunity given him, however, the Eagles were able to get on the board after a high snap on a punt attempt sailed clear over Steve Weatherford’s head. Najee Goode recovered the misplayed ball and stepped into the end zone to cut the NY lead down to 15-7.

Despite the special teams blunder, and Eli’s inability to get his team into the end zone even once on the afternoon, the Giants still came out ahead to collect their second win of the season. The Redskins and Cowboys fell to the Broncos and Lions respectively, which puts Big Blue just 2 games out of first place even with their embarrassing record of 2-6.

The Giants will be off for their BYE week this Sunday, and return to host the Raiders at 1:00 PM on November 10th.

Jets Blown Out by Bengals
The Jets were riding high after beating the Patriots in overtime last week to close within a game of their New England rivals, but they would have to win in Cincinnati to keep pace with the Pats who defeated Miami earlier Sunday afternoon.

Sadly, the game was a train wreck for Gang Green from the beginning. The Bengals marched 80 yards down the field in 10 plays for the first drive of the evening, ending with a 9-yard touchdown pass from Andy Dalton to Marvin Jones. A quick Jets three-and-out gave way to a second Cincinnati TD drive, putting New York down 14-0 before the end of the first quarter.

A series of unsuccessful possessions were capped off with Dalton throwing an interception to Muhammad Wilkerson, putting New York in prime position on the Cinci 30-yard line. Geno Smith could not produce a TD (or even a first down) with the opportunity, forcing the Jets to settle for a field goal.

The Bengals came right back and put up another touchdown on their next drive; after Nick Folk kicked a 47 yarder on the following NY possession, they tacked on another 7 points before the end of the quarter to enter halftime up 28-6.

New York got the ball back to start the third quarter, but on the very first play of the half Smith was picked off by Chris Crocker who returned the ball 32 yards for yet another Bengals touchdown. Nick Folk did put up 3 more points for Gang Green later in the quarter, but he was again answered by another Dalton TD, this time on a 6 yard pass to Jones.

The fourth quarter began in much the same fashion as the third, with Geno Smith tossing a pick on the first drive; this time Adam Jones took it back for the Cincinnati touchdown. Neither team scored again, and the Jets fell 49-9.

Geno Smith went 20/30 for 159 yards with no touchdowns and 2 interceptions. Matt Simms closed out the fourth quarter with 17 yards on 3 for 7 passing; he also led the team in rushing with 35 yards on 3 runs. David Nelson led in receiving with 80 yards on 8 catches.

Rangers End Road Trip on High Note
After spending nearly the entire month of October on the road, the Rangers finished what had been a disastrous start to the season in Detroit on Saturday. Their early woes looked poised to continue as Drew Miller snapped a shot past Cam Talbot to put the Red Wings up 1-0 with under four minutes to go in the first period.

That score held for over a full period, but Benoit Pouliot knocked in his first goal of the year to tie things up on a power play with about three-and-a-half minutes to go in the second. Unfortunately, Detroit quickly retook the lead on their own power play 11 seconds before the break.

Mats Zuccarello knocked in a wrist shot for his first goal of the season two minutes into the third period, creating a 2-2 tie which stood through the remainder of regulation.  The game was all but set to go into a shootout, but with 13 seconds left in OT period Derick Brassard snapped one in to give the Rangers a 3-2 victory.

Talbot stopped 32 of 34 shots on the night. The Rangers will host the Candiens at 7:30 PM tonight for their first home gamer of the year.

Islanders Grounded by Flyers
After knocking off the Rangers 2-1 at home on Thursday, the Flyers traveled to Uniondale to play the Islanders on Saturday. They picked up right where they left off, scoring two goals within a minute of each other to go up 2-0 early in the first period. Kyle Okposo cut the lead in half midway through the period on a slapshot, but Vincent Lecavalier put Philadelphia back ahead by 2 before the period was through.

Frans Nielsen made it close with the second New York goal halfway through the second period, however, it would be the last Islanders’ goal of the night. Lecavalier scored his second goal of the game in the third period, and Matt Read scored an empty netter with 1:32 left to cement a 5-2 victory.

The Islanders will play their next game at home against the Rangers at 7:00 PM tomorrow night.