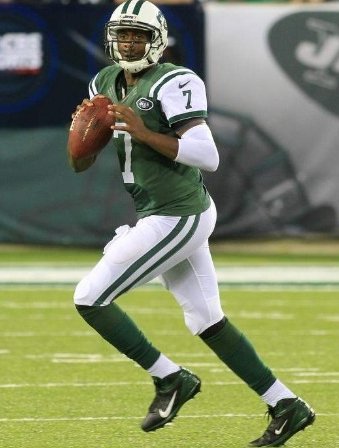 Jets Beat Pats in OT
The Jets entered yesterday afternoon trailing the Patriots by two games in the AFC East, but they had a chance to gain some ground as the Pats came to MetLife Stadium.

Geno Smith got the team started down the right path as he led them 80 yards down the field on the first drive of the day, ending in a short pass to Jeremy Kerley for 12 yards and a touchdown. Tom Brady had other plans, giving a similar performance as he brought his team to the Jets’ 1-yard line and handed the ball off to Bolden for a tying TD, but the real blow came on the next New York possession. After driving the Jets from their own 20 to the Patriot’s 20, he threw an interception to Logan Ryan, who returned it all the way to put New England ahead 14-7.

Nick Folk brought New York within 4 on a field goal early in the second, but a 17 yard run by Ridley put the Pats up 21-10 midway through the quarter. That score held through what remained of the half.

The momentum began to shift after the break when, on the second play of the third quarter, Tom Brady threw an interception to Antonio Allen who returned the ball 16 yards for a touchdown, cutting the deficit down to 21-17. After two Patriot three-and-outs the Jets got the ball back on their own 48, sparking a drive highlighted by a 27 yard pass to David Nelson and two Smith scrambles—the first kept the drive alive, and the second saw Geno run 8 yards for a touchdown.

Before the quarter was over, Nick Folk kicked a 37 yarder, putting the Jets up 27-21.

Brady was not able to reach the end zone again, but he got his team close enough to knock back two field goals. Some strong defensive stops by the Pats sent the game into overtime tied at 27 apiece.

New England got the ball first, but after three straight incomplete passes New York took over on their own 20. They made it to the Patriot 38 and on fourth down Nick Folk attempted a 56 yard field goal; he missed wide left, but the Patriots were called on a penalty for pushing one of their own defensemen forward, giving the Jets 15 yards and a new set of downs. After three unproductive runs, Folk got the ball back and put it through the uprights from 42 yards away, earning the Jets their first win over the Patriots in their last 6 meetings.

Geno Smith went 17 of 33 for 233 yards, an interception, a touchdown, and a rushing TD. Ivory led the team in rushing with 104 yards on 34 carries, and Kerley led in receiving 97 yards and a TD on 8 catches.

The Jets won 30-27, and consequently moved just a game behind the Patriots in the East. They will play the Bengals next on Sunday at 4:05 PM.

Islanders Come Up Short
Having split the first two of a four game home stand, the Islanders were hoping to come out on top of Carolina on Saturday night. The Hurricanes, however, had other plans.

Following a scoreless first period, Carolina jumped out ahead 1:05 into the second on a backhanded shot by Jiri Tlusty. Jordan Staal soon doubled the lead on a power play and Jeff Skinner made it 3-0 before Matt Moulson finally scored the first New York goal with 1:07 left in the period.

The Islanders remained down by 2 until hallway through the third frame, when Tlustly scored his second goal to put Carolina back up by 3. Frans Nielsen quickly undid that bit of damage on a power play and Kyle Okposo brought New York within one goal on a snapshot with 1:01 to go, but it was too little too late. The Hurricanes won 4-3 on a night in which Evgeni Nabokov stopped 19 of 23 shots.

The Islanders will play The Canucks next, at 7:00 PM tomorrow night.

Rangers Stagnate
After three straight atrocious performances on defense, the Rangers finally found some success against the Capitals last week. Unfortunately, the went right back to their losing ways on Saturday in New Jersey.

Andrei Loktionov scored the first goal of the night for the Devils 7:22 into the first period. Adam Henrique put them ahead 2-0 five minutes later, and the Jersey defense kept New York off the scoreboard.

Michael Ryder slapped in the third Devils goal on a power play 6 minutes into the second period, and Dainius Zubrus added another one with 5:28 to go. That was the final goal of the night, and the Rangers lost 4-0 as Henrik Lundqvist stopped only 15 of 19 shots on goal.

The Rangers will try once more to right their ship at 7:00 PM in Philadelphia on Thursday.