Having lost in each of the first six weeks, the Giants finally came out on top last night. 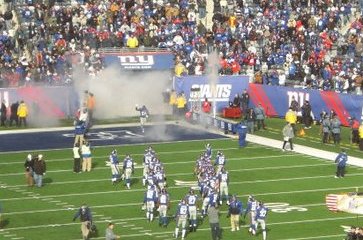 After losing the first six games of the season for only the second time in their long history, the Giants finally broke through into the win column last night. It was not a pretty game, and it was not against an imposing opponent, but with a week and a half of rest New York came out on top of a 1-4 Minnesota team in the midst of a quarterback shuffle.

The Giants ate up a massive piece of the clock on the opening drive, going 68 yards on 17 plays which set Josh Brown up for a 35 yard field goal after about 9:30 of play time. A brief Vikings series gave way to a Giants three-and-out, and on a 51 yard Weatherford punt Marcus Sherels returned the ball 86 yards to put Minnesota up 7-3.

Big Blue got another shot at the red zone in the second quarter when a 23 yard pass intended for Hakeem Nicks was called for defensive interference, advancing the team just outside of the 20 yard line. A 24 yard connection between Eli Manning and Reuben Randle skipped the red and went straight into the end zone, giving New York a 10-7 advantage. Several three-and-outs colored the rest of the quarter as neither team was able to score again before the break.

The first drive of the second half ended with Josh Freeman throwing a pick to Antrel Rolle, but the Giants were unable to take advantage of the opportunity. Following two more quick three-and-outs, Weatherford launched a 57 yard punt deep into Vikes’ territory. Sherels returned it for 3 yards, but fumbled and Zak DeOssie picked the ball up to put the G-Men in prime position. A pair of Peyton Hillis runs gave New York its second touchdown and a 17-7 lead (Hillis was signed last week to help plug some holes dug by Brandon Jacobs’ injured hamstring and the rest of the team’s running backs inability to produce).

A long drive which bridged the third and fourth quarters, and was highlighted by a 21 yard pass to Nicks, culminated in another 3 points for New York on a Brown 23 yarder. Minnesota again came up short on the ensuing kickoff; this time Sharrif Floyd fumbled the ball on the return and Jacquian Williams picked it up to give the Giants possession at the Vikings 18 yard line. Unable to advance the ball any further, New York settled for another field goal, and went ahead 23-7.

Neither team would score again for the rest of the night, giving the Giants a decisive victory in their first win of the season. There was many a dropped pass, quite a few fumbles, an ineffective running game, and struggles on special teams, but they still came out on top.

Eli Manning went 23/39 for just 200 yards and one touchdown, but did not turn the ball over. Peyton Hillis led the team in rushing with 36 yards on 18 carries and Michael Cox had 23 yards on 11 rushes. Victor Cruz led the team in receiving with 50 yards on 5 receptions, followed by Hillis with 45 on 5 catches, and Reuben Randle had 40 yards and a TD on 3 receptions.

The Giants will try to notch their second victory when they head to Philadelphia at 1:00 PM on Sunday.