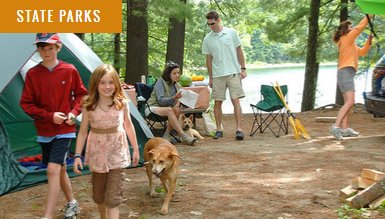 "More and more visitors are discovering that New York's campgrounds provide access to this state's unparalleled natural beauty as well as a wealth of options for recreation and exploration," Governor Cuomo said. "These new record setting numbers are proof positive of this administration's efforts to promote and invest in New York's world class campsites."

As of Columbus Day weekend, 2.008 million people have camped at State Parks in 2015, up from 1.965 million the previous year. Those visitors booked State Park campsites, cabins and cottages for more than 618,000 nights this year. That represents a 4 percent increase over last year’s record of 594,400 overnight stays.

New York State Parks, Recreation and Historic Preservation Commissioner Rose Harvey said, "Governor Cuomo is helping to lead a renaissance of our state parks, and I encourage all New Yorkers to fully enjoy all that they have to offer. State parks continue to offer great events and activities throughout the fall and winter, including ice skating, sledding, snowmobiling, snow-shoeing and cross-country skiing. And it’s not too early to begin planning for a 2016 getaway at one of our incredible destinations."

This year's record attendance comes as Governor Cuomo continues to boost the state's commitment to improving and expanding access to outdoor recreation. The Governor’s NY Parks 2020 plan is a multi-year commitment to leverage a broad range of private and public funding to invest approximately $900 million in State Parks from 2011 to 2020. The 2015-16 State Budget includes $110 million toward this initiative.

New York State Office of Parks, Recreation and Historic Preservation oversees 180 state parks and 35 historic sites. For more information on any of these recreation areas, call 518-474-0456 or visit www.nysparks.com, connecting on Facebook, or following us on Twitter.