The Long Island Rough Riders semi-pro soccer team of the Premier Development League will begin its 19th season of action this spring. 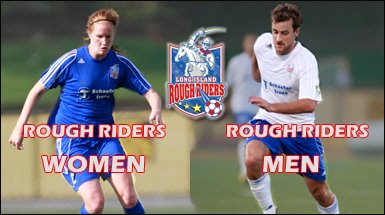 When talking about professional sport teams on Long Island, most people would probably point out the New York Islanders of the NHL. For nearly 20 years, however, the Long Island Rough Riders soccer organization have been playing semi-professional soccer right here on Long Island.

The Rough Riders franchise was established in 1993 by Lou Ederer and Chuck Jocobs, taking the name from the connection between Theodore Roosevelt’s famous military unit and Long Island. The franchise officially entered and began play in the professional division of the United States Interregional Soccer League a year later in 1994.

The organization consists of three main components: the men’s team, the women’s team, and the junior Rough Rider’s program, which consists of players from ages of eight to 17. The men’s team now plays in the Premier Development League (PDL) of the United Soccer Leagues, a league meant for the top collegiate and professional players in the country.

The Rough Riders will celebrate their 19th year of existence this upcoming season beginning on May 18th. The women’s team kicks things off at 5:00 p.m. when they take on the Fredricksburg Impact at Cy Donnelly Stadium in Huntington. The Rough Rider men will host the Baltimore Bohemians at 7:30 p.m. following the women’s game.

The men’s team has won two national championships already in its short history, a goal they set for themselves each and every season.

“Our expectations every year are to compete for a national championship,” said Vice President Flavo Ferri. “We want to showcase the extensive talent of Long Island soccer.”

The Rough Riders do showcase some of the best soccer talent in the Long Island area. Over the years both the men’s and women’s programs have produced some of the top soccer talent. Crystal Dunn of Rockville Centre spent time on the Rough Riders women’s team while she also played at the University of North Carolina. Dunn earned the Hermann Award last season as the nation’s top female soccer player.

Most recently, James Nealis of Massapequa was drafted by the Houston Dynamo of the MLS, and Leo Fernandez was drafted by the Philadelphia Union of the MLS. There are also a few other former professional players who will suit it up for the Rough Riders this year, making their goal of a national championship possible.

Many college athletes do not want to take the summer off, and the Rough Riders as well as all of the Premier Development League is a great way for these athletes to stay in shape and improve. The PDL is the top developmental league in United States soccer and the talent of the players makes for excellent competition.

There has been an enormous amount of talent to come through the Rough Rider’s system. Despite being a semi-professional team, however, there are limitations on what type of players you can use due to NCAA and PDL rules.

“We actively recruit players and players contact us for playing opportunities as well,” said Ferri. “Our team is comprised of mostly collegiate players and some professional players.”

Some players in the PDL do get paid, but players who are still in college are prohibited from getting paid or they would lose NCAA eligibility.

The franchise hosts open tryouts prior to each season for soccer players to come in and try to work their way onto the team. The tryouts are extremely popular and the sign-ups fill up very quickly with eager talent.

The junior program of the Rough Riders franchise also hosts open tryouts for their Super Y-League and Super-20 League. The Junior Rough Riders had great success last season in 2012, with five of their teams reaching the Nationals and two teams winning National Championships. The Rough Riders are committed to developing the young soccer talent on Long Island, and have a proven track record of working with young athletes.

With less than two months until the season opener, the Men’s team is ready for the 14-game regular season that lies ahead. The Rough Riders offer great team and family ticket packages for their upcoming season. They offer opportunities for kids to serve as ball kids for a half, and also ticket packages that include being on the field with the team.