Magic In The Industrial Park: Day Three Of My LI Beer Tour

On day three, I visit Barrage Brewing, Long Island's smallest nanobrewery, as well as the Black Forest Brew Haus, both in Farmingdale. 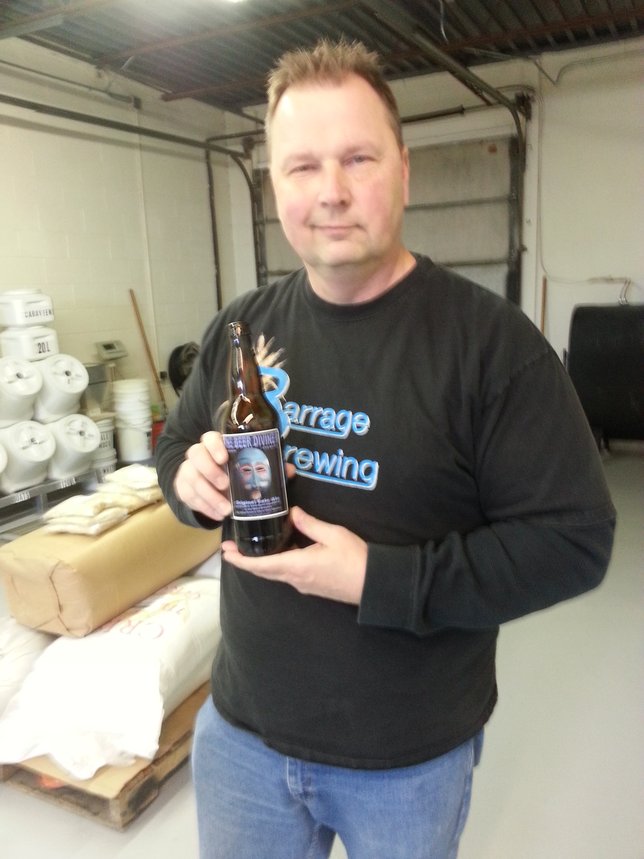 Route 110 in Farmingdale is, as I'm sure you know, quite a congested stretch of roadway. In addition, both sides of the highway are jammed with shops, warehouseses, and fast food outlets. It's a very urban looking expanse, but I was around yesterday not to shop or take in the sights at Adventureland, but rather to try new and exciting beers. My #LIBrewTrip continues.

My first stop was at Barrage Brewing, a nanobrewery set to open next month. It is and will remain Long Island's smallest, but I have a fondness for such a tiny, intimate operation, because the Bly Hollow Brewery is even smaller. Barrage Brewing is housed in a former sign shop that head brewer and owner Steve has meticulously converted into a fully functional brewery. The space is well-lit and actually quite large, easily fitting the brewery's one barrel Blichmann brewing system, along with ten fifty-gallon fermenters, with room for expansion.

Steve was a homebrewer for twenty years before going professional. He got into homebrewing at a time when there were limited supplies for the hobby available locally, and when improvising was sometimes necessary. This was also before recipe sharing on the internet existed, and Steve mainly brewed "old ales from old recipes." The hobby faded a bit for him, though, until he built his own bar at home with a kegerator. After that, he was brewing all the time to keep the bar stocked with his own homebrew. It is here where the name "Barrage" came into existence -- Steve's friends began referring to his mancave as the "Bar-rage," which of course is Bar + Garage.

It was this demand for his beer, in addition to his increased contact and interaction with beer people at festivals, that prompted Steve to begin seeking out a way to build his own brewery, and Barrage Brewing came into existence. This is a labor of love for the head brewer, who has turned an industrial space into a cavern of magic.

I was lucky enough to try two of the brewery's beers yesterday: the Fairy Tale Red Hop Ale and the Raven's Shadow, a rum raisin porter. First off, the Fairy Tale was just that: a super smooth Irish-style red ale, dry hopped with Amarillo for a strong hop bitterness that is actually quite pleasing. There is a strong malt base consisting of Maris Otter, Vienna, and Special Roast, which provides a complex mouthfeel and easy drinking. I'm looking forward to this being available elsewhere. The Raven's Shadow was a much darker style beer. There is a large uptick in the number of brewers attempting dark beers with interesting additions, such as raisins. This porter succeeds admirably. Steve soaked oak chips in rum for one week and then added the oak to the secondary fermenter. The Raven's Shadow has a strong aftertaste of both oak and rum, which combines beautifully with the roasted chocolate sweetness of the aroma and initial flavor. This one is really good. In fact, after a recent beer festival, Steve was interviewed by a reporter from a New York City website regarding the Raven's Shadow, which brought a large volume of attention to his brewery. He certainly deserves the praise.

The brewery is very involved with Long Island-centric beer events and has a remarkably high profile considering it is not yet officially open. For the upcoming Blue Point Cask Festival, Barrage is submitting a coffee hazelnut stout, which sounds fantastic. Steve will have a loyal fanbase to help spread the word once the beer becomes steadily available. He strives for consistency in his brews, and the proof is in the kegs. Barrage Brewing should be open for business next month, and I suggest getting a growler filled to celebrate. Nanobreweries are the engine of innovation in our evolving New York State beer culture, and Barrage Brewing is charging ahead.

My next stop was at the Black Forest Brew Haus, a Bavarian-style brewpub specializing in German beers. You can read my full review here. I am traveling out to Nassau County to visit Croxley's Ale House and Barrier Brewing Company. Follow me live on twitter @InTheNameOfBeer and see all the things I do on this #LIBrewTrip in the name of beer. Cheers!