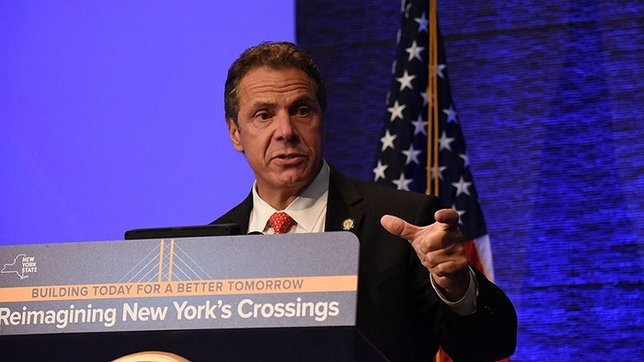 The New York Crossings Project will lead the nation by encompassing all MTA-operated bridges and tunnels in New York City, plus the George Washington Bridge. 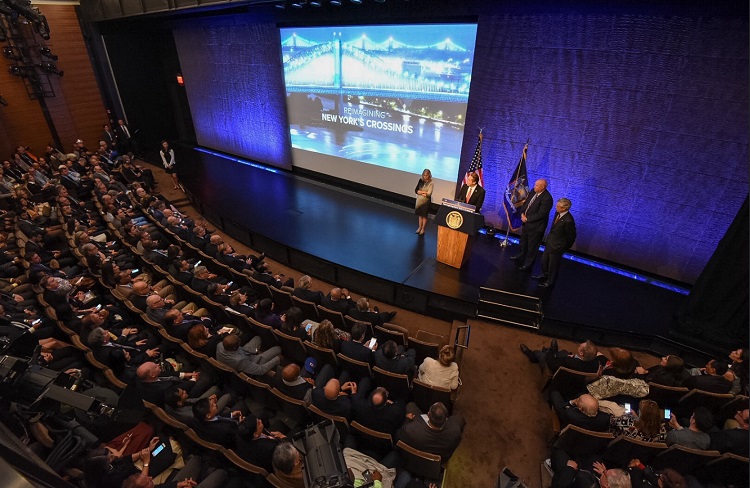 As part of the New York Crossings Project, the Governor also announced the state will implement new tunnel barriers to control major floods and seismic measures on bridges which will provide long-term protection from earthquakes and other natural forces. The transformational project also includes the addition of energy efficient LED lighting. In addition, the MTA will join cities around the globe in providing a renewed focus on public art to ensure our infrastructure projects reflect the grandeur of the Empire State. Under the Governor's plan, New York will redesign tunnel plazas with cutting-edge veils equipped with LED capability, and gantry structures supporting the new electronic toll equipment will feature artistic "wave" designs which will vary in size and scale.

"By investing in New York's transportation network today and equipping it to meet the challenges of tomorrow, we are cementing our state's position as a national leader in 21st century infrastructure and cutting-edge innovation," Governor Cuomo said. "From speeding up commutes and reducing emissions on key roadways with automatic tolling to bolstering resiliency on our bridges and tunnels and increasing security at key checkpoints, this transformational project will revolutionize transportation in New York and ensure that our state is built to lead for generations to come."

View the Governor's presentation unveiling the plan here and the video here.

New York's roads are some of the most congested in the nation, with commutes from Long Island, White Plains, and Northern and Southern New Jersey averaging upwards of two hours. On average, 800,000 vehicles cross MTA tunnels and bridges each day, and as a whole, New York drivers spend more than 6,400 hours per day waiting to pay tolls.

Under the Governor’s leadership, New York State is making record investments in increasing regional public transit capacity. To further reduce traffic congestion, the state is implementing automatic tolling, or "open road tolling." These new, automated tolls will significantly enhance traffic flow, reduce congestion and decrease commute times making it easier for New Yorkers to get where they need to go. Sensors and cameras will be suspended over the highway on structures called "gantries" and vehicles will not be required to stop. Vehicles with E-ZPass will be automatically charged, and non-E-ZPass vehicles will have their license plate recorded and a bill will be mailed to the registered owner of the vehicle.

Automatic tolling is projected to save commuters up to 21 hours of drive time every year. Additionally, automatic tolling reduces emissions and significantly decreases amount of fuel burned by drivers, who will no longer have to stop and start waiting to pay tolls. This will conserve approximately one million gallons of fuel and save $2.3 million each year. Automatic tolling will begin at select bridges in January and be completed on all MTA-operated bridges by the end of next year.

New York is increasingly a target of threats to security. In recognition of this threat, the New York Crossings Project will integrate emerging technologies into the security design of bridges and tunnels across the state, deploying additional personnel and equipment. At each crossing, and at structurally sensitive points on bridges and tunnels, advanced cameras and sensors will be installed to read license plates and test emerging facial recognition software and equipment. These technologies will be applied across airports and transit hubs – including the Penn-Farley Complex – to ultimately develop one system-wide plan.

Anti-terrorism teams will be combined with traffic enforcement at crossings and will develop new operating protocols across agencies. Approximately 525 TBTA officers will provide security and traffic management at bridges and tunnels and will collaborate with State Police on toll enforcement; 150 members of State Police Troop NYC will be assigned at crossings to handle security and anti-terror activities; and 150 National Guardsmen will reinforce troopers on security and anti-terror initiatives. Special barricade trucks will be positioned at both ends of each crossing to serve as intercept vehicles and mobile barriers in the event of an emergency.

Previously, New York’s tunnels were built to protect against a 100-year flood, but the devastation wrought by Hurricanes Sandy and Irene demonstrated a need to enhance protections to withstand a 500-year flood. Tunnels will have new barriers installed to block floodwater from entering with water-tight barriers to protect the tunnel and its facilities. Additionally, tunnels will have increased submersible pumping capacity to protect against flooding. For more information, click here.

MTA's bridges – like many in the Metropolitan region – were built nearly a century ago. The plan includes comprehensive seismic upgrades to make MTA bridges more flexible in the event of an earthquake. All existing bridge bearings will be replaced with "seismic isolation bearings" that allow for rotation, reducing the transfer of seismic forces and mitigating damage. Bridges will have added reinforcement to bridge columns and piers to provide greater resistance to seismic forces. Concrete armor units around the underwater portion of bridge piers will be installed to provide long-term protections beyond seismic events. For more information, click here.

Under Governor Cuomo, New York is recapturing the bold spirit that made it the Empire State in the first place. In the past, New York built projects that were not only practical, but works of public art, like the New York State Capitol, Grand Central Terminal, the original Penn Station and the Central Mall Mosaics at Jones Beach. The MTA has made efforts to incorporate art underground, but this plan will bring back public art aboveground.

The New York Crossings Project will reconfigure toll plazas into modern transportation gateways. Plaza walls will be transformed by veils that shield security personnel and equipment, while acting as LED message boards. Intercept vehicles will be stationed behind the veil and security personnel will have line-of-sight monitoring portals. While plaza redesign will vary, each automated tolling structure on MTA-operated bridges and tunnels will be covered with a decorative artwork presenting a “wave” effect. The wave will be constructed from chainmail fabric which moves with the wind.

LED lighting will be adopted on all MTA bridges and tunnels. LED lights use 40 to 80 percent less power and last six times longer than other types of roadway lighting. In addition to costing less and lasting significantly longer, LED lights can be programmed into different colors and patterns.

The New York Crossings Project will lead the nation by encompassing all MTA-operated bridges and tunnels in New York City, plus the George Washington Bridge. "The City That Never Sleeps," a dusk to dawn lighting schedule, will illuminate these crossings with spectacular, multi-color light shows that will be visible for miles. Illuminating New York's already awe-inspiring structures will transform them into international tourist attractions with the potential to drive additional tourism revenue. LED installations are set to begin this January.

State Senator and Senate Democratic Leader Andrea Stewart-Cousins said, "This is a smart undertaking that will not only make our transportation infrastructure more efficient but also safer and create more jobs. New York must redesign and rebuild for the 21st century to compete in the global marketplace. I look forward to working with the Governor as this transformative project moves forward."

Senator Joseph Robach, Chair of the Senate Transportation Committee said, "New York's bridges and tunnels are used by millions of people each year and essential to our entire region's economic success. Governor Cuomo has put forward a plan to reimagine our transportation system for the 21st century and it will result in less traffic, increased capacity, and more durability to withstand natural disasters. This project is a win-win for New York and its residents, and I can’t wait to see it move forward in the months to come.”

Assemblyman David Gantt, chair of the Assembly Transportation Committee said, “Efficient and secure transportation is an essential to life in our state, however, for many years, our bridges and tunnels have not been meeting the demands of modern day New York. By combining energy-efficient and beautiful construction with common sense innovation and heightened security, Governor Cuomo’s plan meets and exceeds the needs of New York commuters now and for years to come. We must act now to ensure the sustainability of our transit system and Governor Cuomo has laid out a bold plan to do just that.”

Bronx Borough President Ruben Diaz Jr. said, "New York is leading the nation in infrastructure investment because Governor Cuomo recognizes the connection between strong infrastructure and a strong economy. With the needs of the modern economy in mind, the plan includes innovative solutions to everyday problems facing commuters, like automatic tolling, while improving sustainability and efficiency for a stronger, greener New York."

Building and Construction Trades Council of Greater New York President Gary Labarbera said, “No one in recent memory has demonstrated such a commitment to the hard-working men and women of this state than Governor Andrew Cuomo. The proposals unveiled here today are challenging us to consider the future we want to build together. It’s a future that invests in energy efficient, cost-effective projects that are built with the strength and sturdiness necessary to weather the heavy use and heavy storms they’re bound to experience. Our aging bridges and tunnels are eyesores, and the Governor has delivered a plan, right on time. The working men and women of New York stand ready to make it a reality.”

Teamsters Joint Council 16 President George Miranda said, "Investments in infrastructure is one of the best ways to create jobs and jumpstart economic growth, and nobody knows that better than Governor Cuomo. This plan will not only transform New York's bridges and tunnels into the transportation system of tomorrow, but it will create good-paying jobs for thousands of New Yorkers. The working men and women of this state are ready to build for the future and we thank the Governor for his leadership in making these projects a reality.”

NYC Carpenters District Council President Steve McInnis said, “While much of our country struggles to keep up with modern infrastructure demands, Governor Cuomo is leading the way forward. This transformative plan will not only fortify our bridges and tunnels that transport millions of New Yorkers every day, but will heighten their security. The Governor knows that investing in infrastructure means creating jobs and strengthening our economy – since day one he has stood by the side with the men and women of our state, and this renaissance is the cornerstone of that commitment.”

NYS Ironworkers District Council President James Mahoney said, "New York is leading the nation in infrastructure investment because Governor Cuomo recognizes the connection between strong infrastructure and a strong economy. With the needs of the modern economy in mind, the plan includes innovative solutions to everyday problems facing commuters, like automatic tolling, while improving sustainability and efficiency for a stronger, greener New York."