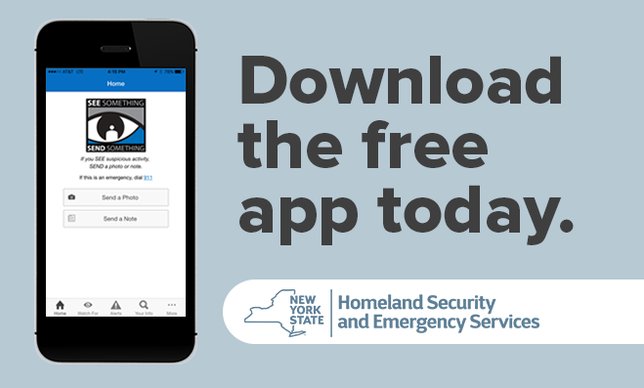 "These new efforts are essential pieces in our fight against terrorism," Governor Cuomo said. "We have stepped up our preparedness in the aftermath of the Paris attacks, and we continue to remain vigilant against those who seek to spread fear and violence. Despite the tremendous pain and loss that terrorist attacks around the world have caused the people of this state, the family of New York stands stronger than ever before."

"See Something, Send Something" allows anyone to capture suspicious activity as a photo or written note and send the information to the New York State Intelligence Center. From there, the tip will be reviewed and if relevant, sent to the appropriate law enforcement agency. Public service announcements promoting the campaign will be played at DMV offices and service areas along state highways.

By using the app, which can be downloaded for free for iPhone and Android phone users, there is no worry about who to send the tip to or what phone number to call—users can simply send a photo of the suspicious activity using their device’s camera, by choosing a photo from its library, or sending a written note. It also includes information on what to look for and when to report suspicious activity. The service is already available in Colorado, Louisiana, Ohio, Pennsylvania and Virginia.

In order to keep the app focused on safety, users should report only suspicious behavior and situations (e.g., an unattended backpack or briefcase in a public place) rather than beliefs, thoughts, ideas, expressions, associations, or speech unrelated to terrorism or other criminal activity. The app does not replace 911 and should not to be used for someone needing immediate police action or to report an emergency. In the case of an immediate threat or emergency, call 9-1-1 immediately.

New York State Police Superintendent Joseph A. D'Amico said, "The crime-solving, tip-sharing process is evolving and so are the New York State Police. This app works just like a traditional telephone crime tip line or hotline, except it is available with the touch of a finger on a handheld device. If you see something that may be linked to terrorism, send something. Your tip could provide valuable information that could prevent a tragedy."

John P. Melville, Division of Homeland Security and Emergency Services Commissioner, said, “It is important to remember that all New Yorkers have a role in keeping our state safe. Citizens have an obligation to report suspicious activity if they see something out of the ordinary or something that may have the potential to harm others. The new app gives individuals an additional way to alert authorities about possible threats.”

The 46 new MTA Police Officers will staff counterterrorism surge assignments at Grand Central and Penn Station, as well as other deployments to ensure the traveling public is protected in the MTA network. The Officers are included in the MTA's 2016 Final Proposed Budget and will have an impact of approximately $3 million. The budget is scheduled for consideration by the MTA Board in December.

All members of the MTA Police Department have been trained in techniques to counter active shooters, such as those who have been implicated in recent terrorist attacks elsewhere in the world. Rather than wait for heavily-armed Emergency Service Unit teams to arrive, officers are taught to immediately engage, pin down and neutralize any potential threat in order to minimize casualties.

In addition, more than 90 percent of frontline personnel in all MTA operating agencies have been trained in how to protect their customers and themselves from an active shooter. Workers on New York City Transit subways and buses, the Staten Island Railway, the LIRR and Metro-North have learned how to evaluate locations where they can safely flee or hide if gunfire occurs.

MTA Chairman Tom Prendergast said, "The MTA Police Department is a robust force of more than 700 officers dedicated to protecting our region’s rail transportation, and these dozens of new officers will bolster our regular counterterrorism patrols of high-visibility terminals. Our officers are well aware that they are protecting a vital public service, and their presence in major train stations serves as a visible deterrent as well as a decisive factor in quickly countering any threat."

The Division of Homeland Security and Emergency Services has provided information on how to prevent terrorism and spot suspicious activity here.