On December 26th at approximately 7:58 PM, the New York State Police responded to a 911 call of a brick being thrown from a pedestrian footbridge, striking a blue 1996 BMW traveling northbound on the ... 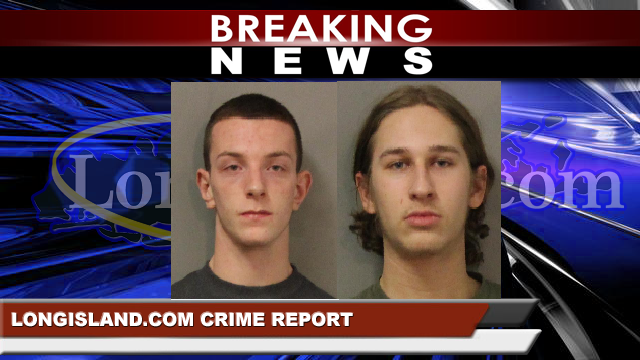 Update - January 2, 2016 - The New York State Police in Valley Stream announce the arrests of Andrew Denton, age 17, of East Meadow, NY and Jacob Palant, age 19, of Syosset, NY after a week long investigation into a brick and cinder block throwing incident that occurred on December 26th, 2015. The incident took place on the Meadowbrook State Parkway from the overpass at Kellenberg High School; two vehicles reported being struck by the bricks and cinder blocks.  Both vehicles, a 2015 Jeep and a 1996 BMW, sustained extensive damage totaling over $1500 each.  A 22 year old female passenger in the BMW suffered injuries which resulted in her hospitalization, as a result of a brick shattering through the windshield.  Denton and Palant were charged with Reckless Endangerment 2nd (3 misdemeanor counts each), Assault 2nd (1 felony count each), and Criminal Mischief 2nd (2 felony counts each).  Both defendants will be arraigned in Nassau County First District Court on January 2, 2016 at 9:00 am.

Uniondale, NY - December 27, 2015 - On December 26th at approximately 7:58 PM, the New York State Police responded to a 911 call of a brick being thrown from a pedestrian footbridge, striking a blue 1996 BMW traveling northbound on the Meadowbrook Parkway just south of Glenn Curtiss Blvd. in Uniondale, NY.  The brick entered the BMW through the windshield, first striking the operator of the BMW, a 21 year old male from Island Park NY in the right shoulder causing bruising, but he declined medical attention.  The front seat passenger, a 22 year old woman from West Hempstead NY, sustained an injury to her left eye and bruising to her mouth from the brick.  The woman was treated and released from Nassau University Medical Center.

Anyone with information regarding this incident please contact the State Police in Farmingdale 631-756-3300.  All calls will remain confidential.