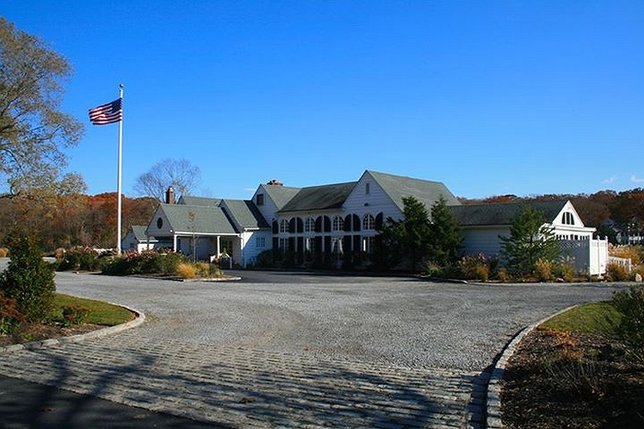 The Old Field Club and Farm in East Setauket is one of the properties to be nominated to the National Register of Historic Places.

In addition to the State Historic Preservation Awards, the New York State Board for Historic Preservation also recommended 28 properties, resources and districts to the State and National Registers of Historic Places. The nominations reflect the remarkable breadth of New York’s history, ranging from the long-time home of civil rights leader Bayard Rustin to a lighthouse in the St. Lawrence River to the neighborhood of the nation’s first African-American Congresswoman in Brooklyn.

“These landmarks are part of New York’s rich history and by preserving their legacies, we are encouraging future growth in communities across the state,” Governor Cuomo said. “I congratulate this year’s recipients on their great work in protecting the Empire State’s unique history and preserving these economic and educational assets for generations to come.”

“We are pleased to recognize these outstanding achievements, which have made significant contributions to historic preservation and revitalization efforts across the state,” Office of Parks, Recreation and Historic Preservation Commissioner Rose Harvey said. “These projects are exceptional examples of how historic preservation can be an important tool for community renewal, economic development and job growth in New York State.”

Established in 1980, the state preservation awards are given each year to honor excellence in the protection and rejuvenation of New York’s historic and cultural resources. Commissioner Harvey presented the awards at a ceremony held in the New York State Capitol. The full list of recipients is below.

Renaissance Albany Hotel, 144 State Street, Albany, Albany County
After sitting vacant for several years, the former DeWitt Clinton Hotel, which was built in 1927, has been rescued and rehabilitated as the Renaissance Albany Hotel by the Columbia Development Companies and its team of construction, design and preservation specialists. The $48 million plus project, which utilized preservation tax credits, combined the restoration of the building’s exterior and public spaces with the rejuvenation of the hotel rooms. The local landmark has been transformed into a vibrant contemporary hotel, helping to further downtown Albany’s revitalization.

Camp Santanoni, Newcomb, Essex County
Created at the end of the 19th century, Camp Santanoni is one of the best preserved and fully developed examples of a compound plan Adirondack camp. The 12,990-acre wilderness retreat retains an impressive range of buildings in three main groups, including the gate lodge, farm and main lodge. Thanks to the outstanding commitment, cooperation and hard work of the New York State Department of Environmental Conservation, Adirondack Architectural Heritage and the town of Newcomb, the camp has been preserved and interpreted for the public’s enjoyment and education.

Old Brooklyn Fire Headquarters, 365 Jay Street, Brooklyn, Kings County
Built in 1892, the old Brooklyn Fire Headquarters is a fine example of Romanesque Revival architecture as applied to a civic building. The firehouse remained in use until the 1970s and was later converted into apartments for seniors and low income residents. Through a successful partnership between the Pratt Area Community Council and MDG Design and Construction, the long-neglected landmark has been rehabilitated for continued residential use. With the help of preservation tax credits, the building’s facade has been restored, and the apartments have been repaired and updated for present-day use.

Mary Helen Joint Meeting House, 7 McCoy Street, Savona, Steuben County
The Savona Free Library, which was established during the early 20th century, purchased a former funeral home in 2011 with the intent of demolishing it to construct a new library. Through the state environmental review process, the library was encouraged to rehabilitate the building, a 1830s Federal-era house. As a result, the library developed a new plan to update the existing library and restore the historic house as an annex, now called the Mary Helen Joint Meeting House. The revitalized landmark offers space for a variety of library activities, including story hours, family movie nights and special events.

Pike Block, South Salina & West Fayette Streets, Syracuse, Onondaga County
The Pike Block includes a collection of 19th century buildings. Several years ago, the CenterState Corporation for Economic Opportunity and Adapt CNY formed a partnership to redevelop the vacant buildings. In 2009, VIP Development Associates was selected as the project developer. The more than $25 million development, which utilized various sources of funding including preservation tax credits, has transformed the abandoned buildings into a vibrant commercial and residential complex.

Building 14, Cadence Square, Canandaigua VA Medical Center, Canandaigua, Ontario County
The Cadence Square development is an outgrowth of the medical center's master plan to revitalize the health care facility for the 21st century. Cazenovia Recovery Systems, in partnership with the Finger Lakes Additions Counseling and Referral Agency, undertook the $11 million project. It combined the rehabilitation of vacant Building 14 for transitional housing and supportive services with the construction of new apartments for veterans in need. The project utilized various funding sources, including preservation tax credits.

Columbia County
Kinderhook African American Cemetery, Kinderhook – Established ca. 1816 exclusively for the use of the area’s black population, the cemetery illuminates an important and underrepresented aspect of the early Dutch-settled village’s history.

Erie County
Elmwood Historic District (East), Buffalo – The district contains more than 1,800 properties, reflective of the city at the height of its prominence as the eighth most populous city in America.

The Fargo Estate Historic District, Buffalo – The district was developed on land surrounding a large estate built by William G. Fargo in 1872. Demolished in 1900, the house and extensive grounds were subsequently replaced in the early 20th century by houses for middle class occupants.

Essex County
Essex County Municipal Complex, Elizabethtown – The courthouse was built in 1824, following the destruction by fire of an earlier building the previous year; it forms the oldest, core section of the complex.

Greene County
Stanton Hill Cemetery, New Baltimore – First established by area Quakers during the 1820s but later opened for secular use; it includes an array of grave stones which reflect various periods and taste in funerary art.

Jefferson County
The Norton-Burnham House, Henderson – Built in 1818 Chester Norton, one of the first settlers in the community, the limestone house was also the birthplace of Daniel Hudson Burnham (1846-1912), a noted Chicago architect, urban planner, and key proponent of the City Beautiful Movement.

Kings County
Congregation Chevra Linath Hazedeck, Brooklyn – Constructed in 1928-32, the “tenement synagogue” dates from a period when Brooklyn was emerging as one of the world’s major Jewish population centers.

Crown Heights North Historic District Boundary Expansion, Brooklyn – the addition to the district created in 2014 comprises more than 600 buildings built from the 1870s to the 1930s and is significant for its association with Shirley Chisholm—the country’s first black congresswoman and a 1972 presidential candidate.

Monroe County
Brockport Cemetery, Brockport – This cemetery served as the final resting place for many citizens from Brockport and the surrounding area from 1829 until 1891, when Lake View Cemetery became the primary burial ground.

Pittsford Village Historic District Boundary Increase, Pittsford – Originally listed in 1984, the district is being expanded with 536, mostly residential, properties, which illustrate how village residents adapted to changing economies and Pittsford’s development as a bedroom community for the city of Rochester.

Thomas L. Hulburt House – The 1853 Greek Revival home was the primary residence of Thomas L. Hulburt (1836-1919), a lawyer and developer who played an important role in the growth and development of the village of Fairport during the late 19th century.

New York County
Bayard Rustin Residence, New York – The Penn South apartment building is nationally significant as the longtime home of Bayard Rustin, a gay African American Quaker civil rights advocate, proponent of non-violence, and campaigner for social and economic justice, who had an impact on many of the nation’s social justice achievements since the 1930s.

Masters Building, New York – The Art Deco skyscraper, the tallest on Riverside Drive, was built in 1929 with the goal of combing art with everyday living, where residents were entitled to unique access to exhibits and art class from associated museums and art institutes.

Oneida County
Whiffen-Ribyat Building, Utica – Constructed in 1893 for Isaac Whiffen’s Sons Meat Company, it later became home to the Ribyat Brothers Furniture Company, which enlarged the building to its current form in 1930.

Otsego County
Warren Ferris House, Springfield Center – The 1894 house epitomizes the Queen Anne style in the complexity of its forms and materials; it was built by Ferris, a local builder who constructed several other houses in the vicinity.

Rockland County
USCO Church, Garnerville – The property is significant for its association with the Company of US or US Company (“USCO”), a group of like-minded artists which formed a collective and communal work and living environment in this former church during the mid to later 1960s. USCO’s “immersive multimedia events” were expressions of the 1960s counterculture phenomenon.

St. Lawrence County
Ogdensburg Harbor Lighthouse, Ogdensburg – Located adjacent to the confluence of the Oswegatchie and St. Lawrence rivers, it was completed in 1871 and long served as a beacon for safe navigation on the St. Lawrence River.

Potsdam Civic Center Complex, Potsdam – A Great Depression-era work relief project, the Neoclassical-style building constructed with walls of rough-hewn Potsdam sandstone ashlar was built from 1934 to 1935 to serve as a community center for the village and town of Potsdam; it incorporates a former Universalist Church, erected 1876-77, within its walls.

Schoharie County
Johannes Lawyer Jr. House, Schoharie – The 1790 house dates from the reconstruction of Schoharie after the Revolutionary War, when most of the original settlement was destroyed, and incorporates stylistic features from a variety of building traditions – New World Dutch, Federal, and Greek Revival.

Steuben County
Temple Beth El, Hornell – Constructed in 1946 by a congregation that pooled its resources to build its own house of worship near the center of the community, the small synagogue reflects the pattern of Jewish settlement across the small towns of New York State.

Quogue Historic District, Quogue – The district includes a remarkable collection of architecture that reflects Quogue’s history as an early agricultural community that transformed into a predominantly seasonal community during the nineteenth century.

Warren County
Caldwell Presbyterian Church, Lake George – The architecturally significant building was erected in the mid-1850s at a time the congregation was being reinvigorated by revivalist sentiment. It is an intact example of mid-19th century Protestant church architecture.