Both the Yanks and Mets won their last games of the season, but the Giants and Jets fell well short on Sunday. 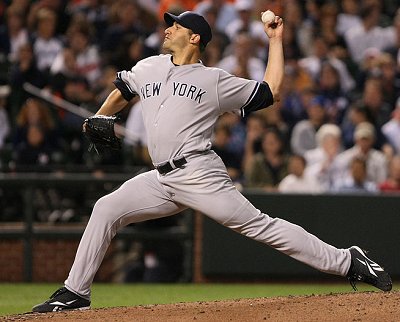 After Mariano Rivera and Andy Pettitte said their goodbyes to Yankee stadium, the Yankees travelled to Houston for a series against the team Pettitte played with for a three year stint between jobs with the Yankees. They won 3-2 on Friday, and turned the ball over to Andy for one last time on Saturday night.

Andy, who has had a strong showing over the last two months of the season, gave up the first run of the game on an RBI groundout in the bottom of the fourth. He got out of the inning without further damage, allowing the Yankees to give him a lead two innings later. Robinson Cano singled in the first Yankee run in the sixth, and Eduard Nunez later ran home on a throwing error by Houston catcher Pagnozzi to put New York ahead 2-1.

The lead, though slim, was all Pettitte needed. Andy gave up just the one run, 2 walks and 5 hits. He threw 116 pitches over 9 innings as he went the distance to collect his 11th win of the season, and the Yankees won 2-1 in Andy Pettitte’s complete and final start.

David Huff got the start in Sunday’s season finale. He gave up a run on an RBI single in the first inning, but buckled down to notch 7 strikeouts with just 3 hits and no walks over five innings. The bullpen pieced together the rest of the game without allowing another Houston run, as well it needed to.

Curtis Granderson knocked in the only Yankee run of regulation on a single in the eighth inning, tying the score at 1 apiece. The tie held through several innings of extras, and did not end until Mark Reynolds launched his 21st homer of the season to start the top of the 14th. Eduardo Nunez later tacked on 2 runs with a double, and JR Murphy rounded things out with an RBI single to put the Yanks up 5-1.

David Robertson came on to close out the evening, giving the Yankees a win in their final game and a sweep of their final series of the season. They finish the year with a record of 85-77, tied with the Baltimore Orioles in the middle of the AL East.

The Mets entered Saturday afternoon having lost to the Brewers by a score of 4-2 two days in a row. Aaron Harang pitched well enough to avoid a similar outcome, giving up just one run on a Gomez on a homer in the fourth over six innings of work. Daniel Murphy answered the Gomez shot with a sacrifice fly in the bottom of the fourth to tie the game.

Milwaukee took the lead again in the eighth inning when Yuniesky Betancourt knocked in a run on a sac. fly off Vic Black, but Eric Young tied things up 2-2 with an RBI single in the bottom of the ninth. Unfortunately, Gomez and Betancourt both drove in a run in the tenth inning, which New York was unable to answer, giving them a 4-2 win for the third straight day.

For the final game of the season, the Mets got on the board early with a David Wright sacrifice fly in the bottom of the first. The lead held until the fourth when Jon Niese loaded the bases, then gave up a run on a groundout and a second on a Schafer single, putting the Brewers ahead 2-1.

Juan Centeno tied the game up in the eighth on a single, and Eric Young scored the go-ahead on a groundout before the inning was out. Frank Francisco closed out the ninth, giving New York a 3-2 win and allowing them to avoid a four-game sweep to end the season.

The Mets finish the year with a record of 74-88, in third place in the NL East.

Giants Continue to Struggle on All Fronts

After three straight losses to start the season, the Giants looked like they may have ironed out some of their many flaws against the Kansas City Chiefs. Though a scoreless first quarter quickly gave way to a Kansas touchdown roughly ten seconds into the second, the TD was quickly answered courtesy of a 69 yard pass from Eli Manning to Victor Cruz for a touchdown of New York’s own.

The Chiefs went ahead again late in the half on a 51 yard field goal, which New York tried to answer with the clock winding down. Josh Brown missed from 44 yard out, and the Giants remained down 10-7 going into the third quarter.

The next scoring play came late in the third, this time on special teams. Steve Weatherford punted the ball 59 yards after a Giants 3-and-out, which Dexter McCluster brought back all the way to put the Chiefs up 17-7. New York allowed Kansas City to score two more touchdowns in the fourth quarter, and could not muster another of their own. The Giants lost 31-7, falling to 4-0 on the season.

Eli Manning went 18/37 for 217 yards with 1 TD and 1 interception; he also fumbled twice and was sacked three times. Victor Cruz led the team in receiving with 164 yards and 1 TD on 10 receptions. Nicks, who followed Cruz, had only 33 yards on 3 receptions. The running game improved slightly this week, with David Wilson up to 55 yards on 13 carries, but the team still ran for less than 100 as a whole.

The Giants will try to get their first win when they play the Eagles at 1:00 PM this coming Sunday. Despite the awful start, and the fact that they are now in sole possession of last place, they remain only two games behind the NFC East-leading Cowboys.

Jets Wish They Could Forget the Titans

The Jets’ defense quickly gave up the first touchdown of the afternoon to Tennessee in the first quarter of Sunday’s game, to which the Titans tacked on a field goal before the quarter was through. Geno Smith led his team down the field in the final drive of the first, setting Nick Folk up for a successful 45 yard field goal to start the second quarter.

Unfortunately, the Titans kept rolling over New York’s defense, scoring another TD on a connection between Jake Locker and Nate Washington midway through the second. Folk kicked another FG shortly thereafter, but the Jets remained down by a wide margin. Another Locker touchdown before the quarter ended buried them even further, making it 24-6 entering the half.

Neither team scored in the third, but Geno Smith fumbled the ball and it was taken back for another Tennessee TD early in the fourth. Smith threw his first and only touchdown on the ensuing drive—a 34 yard pass to Jeff Cumberland—which the Titans quickly answered on their next possession. The Jets ultimately fell 38-13.