Sunday was “Mariano Rivera Day” in Yankee Stadium, but Thursday provided the most touching moments of his final season. 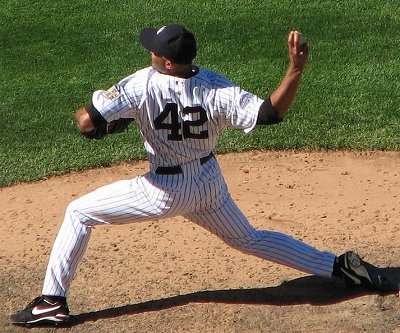 After taking two of three from the Giants, the Yankees’ playoff hopes came to a sudden end in the final week of the season. Hiroki Kuroda, who had been New York’s strongest starter for most of the season, continued his recent struggles in giving up a leadoff homerun to Tampa Bay’s Matt Joyce in the first inning on Tuesday night. The inning got worse form there as a double and sacrifice fly drove in two more runs, putting the Rays up 3-0.

Kuroda buckled down after the first, as he has become wont to do, but allowed a 2-RBI double off the bat of James Loney in the sixth. The Yanks did not provide any run support, and the Rays hit Shawn Kelley for 2 more runs in the ninth en route to a 7-0 win over New York.

Phil Hughes remained on a short leash in Wednesday’s follow up. He gave up an RBI double in the first inning, which Robinson Cano answered in kind with his 40th double of the season (tying Lou Gehrig’s Yankee record of 7 seasons with 40+ doubles) and got through the second inning, but gave the lead back in the third. Tampa began the frame with a Loney double, then hit Hughes for three straight singles (including a RBI), convincing Joe Girardi to take him out of the game in favor of David Huff. Huff got all three outs in quick succession, though one came on a sac. fly that put New York down 3-1.

Eduardo Nunez kept the Bronx Bombers in the game with a leadoff homerun in the bottom of the third and they remained within striking distance for a couple innings. Unfortunately, Huff gave up 4 runs on back-to-back homers in the top of the sixth; the only run scored after that point came on an Evan Longoria homer in the ninth, handing the Yankees an 8-3 loss. The defeat also removed New York from contention for any spot in the postseason.

Tampa Bay kept rolling on Thursday night as Alex Cobb held the Yankees scoreless for seven innings. For his part Ivan Nova did not have a bad game, but did allow a run in the fourth, and a second on a Delmon Young homer in the seventh. Dellin Betances, who was brought back up to the Majors as a September call-up, allowed two runs and got just one out as he took over in the eighth, prompting Girardi to send out Mariano Rivera before a sellout crowd an inning early.

The Bronx erupted into applause as the sport’s greatest closer made his way to Yankee Stadium’s mound one last time. Appropriately, Rivera got the first out of his night on one simple pitch, and the second with several of his iconic cutters.

Mo worked two more outs in the ninth, both courtesy of his cutter, but did not stay on to finish the game. With just one out to go, nearly career-long teammates Derek Jeter and Andy Pettitte walked toward the mound to relive Mariano of duty; Mo dropped the ball into Pettitte’s hand, then let go of his stoic nature and cried into the starter’s shoulder.

There was scarcely a dry eye in the stadium as cheers rang out in bittersweet celebration of a historic career and a man who had, to that point, been unflappable throughout it. Mariano said his goodbyes to his fans and teammates, then collected a handful of dirt from that mound which has belonged to him for nearly 20 years. Both he and Pettitte gave a final curtain call as the soon-to-be retired pitchers bid farewell to the game and the city they love.

The Yankees lost 4-0 that night. It didn’t matter.

As beautiful an end to Rivera’s tenure as the night provided, there were still three games left to be played in Houston after it was over. The Yanks decided to put Adam Warren on the mound last night; he made the most of the start, throwing 5 innings of scoreless ball with 4 strikeouts, 1 walk, and just 2 hits.

The team gave Warren a lead to work with before his taken out, beginning with a Mark Reynolds RBI single in the fourth inning. David Adams drove in two more on a double in the next at-bat, putting New York ahead 3-0.

The Astros rallied a bit in the seventh, putting two men on base against David Phelps, and then bringing them both home on a double off Joba Chamberlain. Joba struggled to get out of the inning, but did so all the same, and the Yankees remained on top 3-2. A scoreless eighth gave way to a save situation in the bottom of the ninth, but much to the Texas crowd’s dismay, David Robertson came on to nail down the game. He worked a 1-2-3 inning on 7 pitches, earning his 3rd save as Adam Warren got his 3rd win and the team snapped a four-game losing streak.

The Yanks will continue the series at 7:10 PM tonight, and finish the season at 2:10 PM tomorrow. Andy Pettitte will make the final start of his career in his one-time home today, and Mariano may yet have a save or two left in his arm.

The Mets travelled to Cincinnati for their last road series of the season on Monday. Aaron Harrang worked in and out of trouble in the first inning, but gave up the first run of the game on a Shin-Soo Choo single in the second and put the Reds up 2-0 on two straight walks, the first of which loaded the bases.

Lucas Duda cut the deficit down to 1 with a sacrifice fly in the top of the third, then tied the game with homer in the sixth. The score did not change in regulation, leaving Choo to break the tie with a walk-off RBI single in the tenth. The Mets lost 3-2, and the Reds clinched a playoff berth with the win.

Jon Niese got a little more run support on Tuesday, beginning with a Wilfredo Tovar RBI single in the top of the second. Niese followed the hit up with a single on which Tovar tried to score, but was thrown out at home. Fortunately, Eric Young doubled in the next at-bat after the play at the plate, and Daniel Murphy knocked one out the park to put the Mets up 4-0.

Cincinnati scored a run off Niese in the bottom half of the inning, and a second in the fifth, but could not come back from the hole dug in the second. New York won 4-2 and Niese improved to 8-8.

Daisuke Matsuzaka gave his strongest performance since returning to the big leagues in Wednesday’s rubber game. Over seven and two-thirds innings he struck out 6, walked 2, and allowed just 4 hits, none of which would come home for a run.

The bullpen continued the shutout, as it very much needed to. Eric Young’s RBI single in the third was the only New York run scored throughout the entire game; it held up as Matsuzaka improved to 3-3 and LaTroy Hawkins picked up his 13th save in a 1-0 Mets win that gave them the series, and dashed the Reds’ hopes and taking the NL Central.

The Mets returned home to wrap up the season in a four game set against the Brewers on Thursday. Jon Niese worked a 1-2-3 first inning, but after putting two on to start the second gave up three singles for 4 runs before he could get out of the jam. Daniel Murphy put the Mets on the board with an RBI groundout in the third, however the score would remain put until the ninth inning.

Josh Satin led off the last frame of the game with a grinding 8-pitch at-bat ending in a homerun that just made it over the fence. It was the last play of the game to bring in a run; Milwaukee won 4-2.

Last night got off to an even poorer start as Carlos Torres gave up a homerun to Norichika Aoki in the game’s first at-bat. Torres struck out Scooter Gennett in the ensuing at-bat, but did so on a wild pitch which allowed Gennett to safely reach first base. Khris Davis homered shortly afterward, putting the Brewers up 3-0 before the Mets even came to the plate.

Juan Lagares put a dent in the deficit with a sacrifice fly in the bottom of the second, and Justin Turner’s RBI single in the sixth cut it down to one. A Milwaukee homer in the top of the seventh put the Brewers back up by two, however, and New York was unable to score again. The Mets lost 4-2 for the second night in a row.

The series will continue at 4:10 PM today, and the Mets will finish out their season at 1:10 PM tomorrow.