The Jets and Giants played their final games of season this Sunday, while the Nets try to turn their own season around.

Jets Go Out With a Whimper

When the Jets and Bills faced off in Week 1 of the season, New York was in rare form; the team was firing on all cylinders and blew Buffalo out 48-28. Perhaps it is only fitting then, that at the end of a year plagued by quarterback controversies, injuries, poor decisions and even worse execution, Gang Green would run up against the Bills once more, and this time crumble.

Mark Sanchez got the start, as third-stringer Greg McElroy was out with a concussion and backup Tim Tebow is expected to depart from New York before next year. He did little to endear himself to the team or potential offseason suitors, completing less than half of his attempts as he went 17/35 for 205 yards, no touchdowns, and an interception. The Jet’s running game was no more effective; Greene ran for 74 yards on 19 touches while Powell had 56 on 12.

Nick Folk provided the team’s only points, putting up one field goal in the first quarter from 47 yards out, and another two in the second from 23 and 28 yards.

The Third Folk FG did give the Jets a temporary 9-7 lead, but the Bills quickly erased it with their second TD less than 30 seconds later. A scoreless third quarter kept the game relatively close until Buffalo ran in two more touchdowns in the fourth, defeating New York 28-9.

Following this resounding defeat, and a 6-10 season, CEO Woody Johnson has announced he will be letting go of General Manager Mike Tannenbaum and searching for a new GM. Rex Ryan, who is contracted through next season, will stay on as head coach, while the quarterback situation is still up in the air. All three Jets QB’s have contracts for next year, with Sanchez’s taking up a sizeable chunk of the team’s payroll.

One Giant Effort Not Sufficient for Playoff Berth

With an 8-7 record, the Giants came into their final regular season game needing a great deal of help to make another run at the playoffs. Not only did they have to defeat the Eagles— to whom they lost 17-19 in Week 4—they needed the Cowboys, Bears, and Vikings to each lose their games as well.

Big Blue did their part, as Eli and the rest of his offense came out of the weeks-long 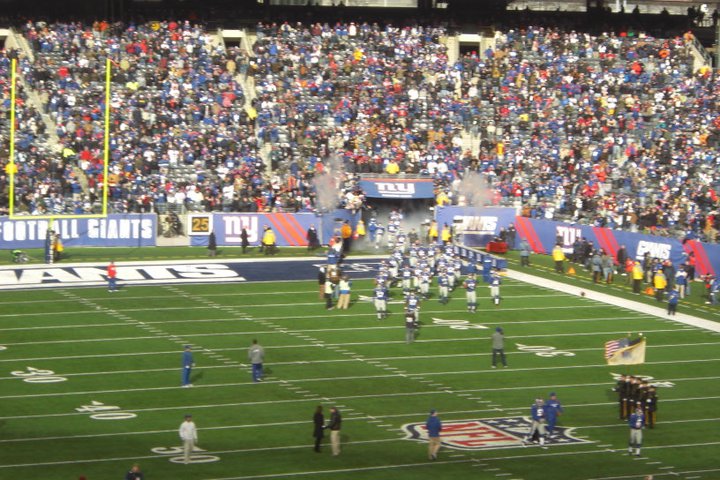 slump which cost them the NFC East title. Manning threw three touchdowns—two to Randle, and one to Wilson—in the first quarter alone.

Two more TD’s came during the second quarter, as Bradshaw ran one in following Philadelphia’s only scoring drive, and Manning connected to fan-favorite Victor Cruz in a 13-second drive that closed out the half.

The third quarter was a scoreless one, but Eli had one more TD in him as he threw to Henry Hynoski halfway through the fourth. It was the tight end’s first career touchdown, and with it the Giants went up 42-7.

Despite their complete domination of a division rival which has given them much trouble in recent years, the Giants would not advance to the playoffs. The Cowboys fell to the Redskins, crowning a new NFC East champion, but the Bears would defeat the Lions shortly after Big Blue’s own victory, thus ending any hopes for a wildcard spot. Chicago’s hopes would also come crashing down, as the Vikings defeated Green Bay to take the sixth seed in the NFC.

With that, the Giants’ season ends, and while it does end on a high note, it leaves no chance to defend the Lombardi trophy earned last February.

The Nets won their second straight game under interim coach PJ Carlesimo as they hosted the Cavaliers on Saturday. Despite being outscored in the second, third, and fourth quarters, a 34-24 first period would provide all the cushion the team needed to win by a final of 103-100.

Brook Lopez posted a double-double with 11 rebounds and a season high 35 points, 11 of which came in the last quarter. Johnson and Williams backed him up with 15 points apiece, while the rest of the team stayed in single digits. The win is a refreshing turn of events for the team, but it comes over a feeble opponent and by a narrow margin at that.

Brooklyn ran up against their first competitive opponent since firing Avery Johnson last night, and the results left the Nets happy to leave 2012 behind.

The Nets entered the half trailing San Antonio by 8 points; the third quarter would prove fatal for them. Missing shot, after shot, after shot, Brooklyn scored only 5 points through the entirety of the third—making only 2 of 20 baskets— as the Spurs padded their lead by 25. Ultimately, the Nets would lose by an embarrassing final of 104-73. It seems that Brooklyn will need more than a coaching shakeup in order to right the problems they have had over the past few weeks.

Brooklyn’s next game will be against Oklahoma City, tomorrow night at 8.