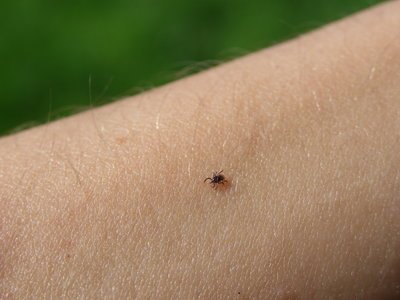 Hurricane Sandy hit New York on October 29, 2012. With it came violent wind, floods, and insurmountable wreckage. Seven months later those floods have subsided and the wreckage is nearly cleaned up but Sandy may have delivered one more thing to us. Mosquitoes and ticks have showed up en masse during the early days of summer more so than in other years.

Dr. Jody Gangloff-Kaufman has an answer for the recent surge in the insects that has left Babylon residents puzzled. In an interview for CBS News, Dr. Gangloff-Kaufman said, "Hurricane Sandy may have carved gullies under streets and infrastructure where standing water can accumulate." The gullies have become a breeding ground for the mosquitoes.

One of the fears of this outbreak of mosquitoes is the West Nile Virus. According to Web MD, 80% of people feel no symptoms of West Nile. Anyone ages 50 and up are more at risk of contracting it.  Symptoms include body aches, fever, headaches, vomiting, and swollen glands. Serious symptons that require doctor’s care are high fever, muscle weakness, vision loss, neck stiffness, disorientation, tremors, convulsions, numbness, and paralysis.

The Environmental Protection Agency says the best insect repellant to get are ones with DEET or Picardin. Studies show that these repellants last longer. A good alternative is oil of lemon eucalyptus. That is just as good as repellants with low levels of DEET.

Ed Rhoades, of the Mosquito Squad in Babylon, says to look out for any standing water and puddles. Mosquitoes love those areas. As for the ticks, Rhoades says they can be found on long grass. It's there they'll feed on the blades. Another reason for all the ticks is the beginning of the deer fawning season.

The danger of ticks is Lyme Disease which can be contracted through the insect's bite. Symptoms of Lyme Disease are fatigue, headache, stiff neck, fever, muscle or joint pain, and a rash. If no rash develops, the place of the bite takes the shape of a bulls-eye. It can be treated by anti-biotics but if it isn’t, it can lead to complications involving the heart, nervous system, and joints. These complications could take up to weeks, months, and even years to flare up.

The combination of a warm and rainy May has helped speed up the multiplying of ticks and mosquitoes. This Summer Nassau and Suffolk will be spraying extra early this year.