The U.S. Army is using artificial intelligence and animation as part of its online recruiting process.

He's described as six foot one, works around the clock, never rests and is a key tool in the U.S. Army's recruiting efforts. But he doesn't need leave or a lunch break. He isn't stationed at any army base.

The software sergeant is an animated figure and an app helping put a friendly face on the U.S. Army's recruiting efforts, informing people instantaneously of nearly any answer. Some people call him "robo recruiter."

The sleepless sergeant, appearing from goarmy.com to Facebook, has become a key part of a recruiting campaitn.

While the U.S. Army offers financial incentives, one could say it's also trying to show the soft side of soldiering - or the tough side with a soft edge via animation.

Sgt. Star, created with the help of artificial intelligence by Melville-based Verint Systems, is turning into a valuable weapon in winning over recruits through a combination of art and technology.

And now the screen-based sergeant and associated software have won some recognition for his or its work.

Star is actually an acronym for "Strong, Trained and Ready" as well for the character who has more than 800 answers ready to go.

He's also part of a virtual army of avatars the military developed in a war to win over recruits, including Sergeant John Blackwell.

USC's Institute for Creative Technologies went the extra mile to bring these characters to life via animation designed to "create a believable virtual human being capable of real-time spoken interaction on a limited content domain," as the school describes it.

"Engaging and funny, Blackwell even answers open-ended questions," according to the Institute. "For example, when asked, 'What time is it?" he may answer, 'What am I, a clock?' Or if asked about the weather, he may reply, 'You are asking me the wrong question. Why don't you try asking me about technology?'"

Sergeant Star, meanwhile, is equipped with an encyclopedic range of answers to basic and even personal questions, often referring people to recruiters.

If you want to know about how many people a sergeant, for instance, might command, Star can tell you.

"A squad, 9-10 soldiers, is typically commanded by a sergeant or a staff sergeant," he replies. "A squad or section is the smallest element in Army strucutre, and its size is dependent on its function."

As Verint describes it, the animated figure who appears along with answers to a wide range of questions is a six foot one inches tall, a Caucasian character with a crew cut, although he's much smaller on cell phones and computer screens.

"Hello. I'm SGT STAR, the Virtual Guide for goarmy.com," the screen sergeant says online. "My training allows me to answer almost any question about what life is like in the US Army. Interacting with me is simple. Just type in your question just as though you were chatting with a live recruiter."

Verint says this virtual sergeant meets with about 900 people a day online and has generated more than 11,000 leads for the Army’s recruiting team.

The company adds that this screen-based sergeant has an over 94 percent accuracy rate, has answered more than 16 million questions and became the first such intelligent virtual assistant in the industry to answer questions on Facebook.

The company also called the product "the first intelligent virtual assistant to answer questions by voice or text on mobile devices."

Sgt. Star is well enough informed to field most questions: Only 3 percent of questions asked of Sgt. Star need to be routed to "live chat" through an operator. 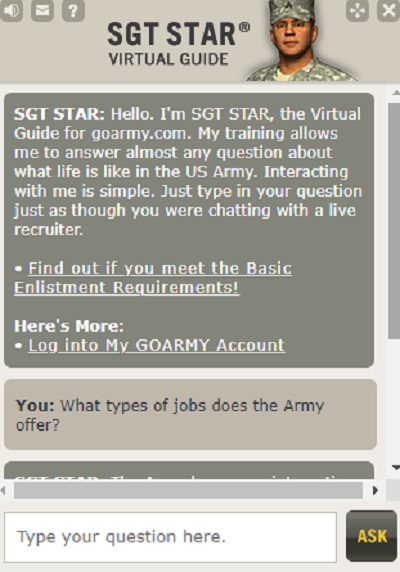 “The Verint conversational AI platform, part of the company’s Intelligent self-service offerings, is helping organizations increase self-service capabilities that automate simple tasks and empower customers to help themselves,” Verint said in a written statement regarding its use beyond the military, “while freeing agents to deal with higher value issues and achieving new levels of excellence in customer service.”

The AI Breakthrough Awards program seek to honor excellence in AI technologies, services, companies and products. Few go to services or systems related to the military.

“The key to the 2019 award recognition goes beyond just natural language understanding to our conversational AI platform’s ability to use machine learning for extending and expanding knowledge, capabilities and language,” Nancy Treaster, Verint’s senior vice president and general manager of strategic operations, said in a statement.

She called Verint’s intelligent virtual assistant and affiliated software "a technology breakthrough we have harnessed to help our customers transform their self-service strategies, lower costs and increase revenue."

The U.S. Army, Verint said, realized the need to rely more on tech as part of the recruiting process at a time when technology plays an increasing role in the military.

"The U.S. Army’s online and mobile presence is challenged to become a crucial element in the Army’s recruiting and communications strategy," Verint said in a written statement. "The U.S. Army’s leadership sought a self-service solution to provide users with a personalized, engaging online experience that quickly and accurately connects users with the most relevant information."

After 9/ll, the Army saw an upswing in interest in enlistment, which made it difficult for actual recruiters to keep pace.

Enter Sgt. Star who has had a successful career and added different abilities over the year. Verint and the U.S. Army in 2006 launched what Verint calls a "no nonsense, straight-talking intelligent virtual assistant named Sgt. Star at goarmy.com." The screen soldier only grew in capacity and importance with time.

"Sgt. Star is your virtual guide to goarmy.com," according to the U.S. Army."He's here to help answer any questions you have about the Army. Just type in what you're looking for and he'll find the information you need - fast."

Sgt. Star debuted in the Google Play Store in December of 2012 and later joined the App Store in July of 2014.

"The downloadable Sgt. Star app gives users the ability to have true conversations with Sgt. Star using their voice, along with touch," according to Verint. "The Sgt. Star app has already received significant media coverage, positive user reviews and, most importantly, is making it easier than ever for recruits to explore Army life anytime and anywhere."

Verint indicates that the character and the software have made a difference in recruiting, guiding people through the first steps of the process online.

"The impact on goarmy.com was immediate, proving Verint’s ability to improve the engagement, adoption and effectiveness of the self-service web," according to Verint. "Sgt. Star is able to engage users in a way that is both personal and accurate, fielding common questions about pay, ROTC benefits and discreetly answering more awkward or intimate questions about male/female living conditions or paternity leave."

As Verint sees it, Sgt. Star has become a very real, if virtual, part of the recruiting process.

"Sgt. Star has become the face of Army recruiting, with a viral popularity that is even spreading outside of the U.S.," according to the company.

Verint has won other awards for its work. The company last year won for “Best Overall AI Solution” in the AI Breakthrough Awards, continuing to attract attention for its technology.

“We are clearly at a point of mainstream consensus that artificial intelligence will change the way businesses and consumers interact and work,” James Johnson, managing director, AI Breakthrough, which runs the awards, said in a statement.

More than 10,000 organizations in more than 180 countries, including over 85 percent of the Fortune 100, use Verint product.