Governor Cuomo To Amazon: Join Us By Locating HQ2 In New York State So We Can Grow Ever Upward Together

Cuomo: "We have the workforce to help Amazon grow. Our skilled, educated, and diverse workforce provides Amazon with the human capital that is at the heart of your business." 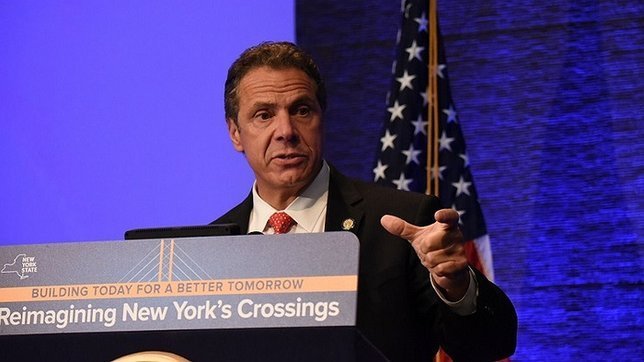 Albany, NY - October 19, 2017 - Governor Andrew M. Cuomo issued a letter to Amazon Founder, Chairman & CEO Jeff Bezos as part of New York's responses to the Amazon HQ2 RFP. The letter accompanied each of New York's four submissions to the RFP: Buffalo/Rochester; Syracuse/Utica/Mohawk Valley; Albany/Capital Region; and New York City/Long Island/Mid-Hudson.
The submissions are supported by a full complement of state incentives, including Excelsior tax credits tied to potential job creation and other assistance with the development of office space, workforce development, educational programming and research collaborations.
The submissions follow Amazon's recent move to expand its presence in New York in September with the addition of a 359,000 square-foot administrative office at 5 Manhattan West, creating 2,000 new, high-paying jobs. Last month, Governor Cuomo also announced a new $100 million Amazon fulfillment center in the Global Logistics Park on the West Shore of Staten Island, which will support the creation of 2,250 new, full-time jobs.
Since 2012, Amazon has invested $9 million into an innovative Fashion Photography and Videography Studio in Brooklyn, creating over 50 direct jobs and supporting more than 300 jobs. In 2014, Amazon established a 350,000 square foot administrative office at 7 West 34th Street, creating over 500 jobs.
The text of the letter is available here and below.
Dear Jeff and Team:
Commercial innovation is embedded in New York's DNA.  When the Erie Canal opened in 1825, it reduced shipping time from New York City to Buffalo from twenty-one days to six, and it cut the cost to ship a ton of goods from $100 to $5.  Consumers suddenly had access to much greater choice at much lower cost - exactly the kind of innovation Amazon delivers.
The Canal transformed commerce across the country by connecting the Eastern seaboard with the west, and it wove the Empire State and its economy together in ways that are relevant to Amazon today.  From the booming tech industry to our vibrant film industry, from agriculture and food processing to logistics to aerospace and drone testing, we lead in the industries that align with your company.  Add to that our world-leading position in finance, fashion, marketing, merchandising, and advertising and it's clear we can help Amazon continue to achieve exponential growth.
This engineering marvel taught us a vital lesson about the importance of transportation.  Two centuries later, New York is in the midst of a similar renaissance with a $100 billion transportation infrastructure program - the most ambitious in our history.  Transformative investments in airports, train halls, subways, roads and bridges from the tip of Long Island to the shores of Lake Erie and everywhere in between make New York the place to move goods and people.
Most importantly, we have the workforce to help Amazon grow. Our skilled, educated, and diverse workforce provides Amazon with the human capital that is at the heart of your business.  A global company needs to welcome global ideas, talent, and experiences into its organization, just as we have so proudly welcomed remarkable people from around the world to the New York State family throughout our history.
Our record of accomplishment in New York speaks for itself; over 1 million new jobs in recent years, the best bond rating in over fifty years, lower taxes for every New Yorker, unprecedented infrastructure investments, the country's most robust array of colleges and universities focused on education and research in disciplines relevant to Amazon, and the best workforce in the country.
As New Yorkers, we believe that economic progress and social progress go hand in hand. We've led the nation in passing marriage equality, paid family leave, and $15 minimum wage.  This year we announced the Excelsior Scholarship, the first-in-the-nation program to make college education 100% tuition-free for thousands of students from working-class and middle-class families. From our K-12 tech education initiatives to the Excelsior Scholarship program, the Empire State is building the workforce talent pipeline of tomorrow.
New York is submitting proposals from every corner of our great state, but we are one New York - and we will work with you to create the greatest possible benefit to Amazon and to all New Yorkers.
Our State motto Excelsior means "Ever Upward."  Join us by locating HQ2 in New York State so we can grow ever upward together.
Sincerely,
Governor Andrew M. Cuomo