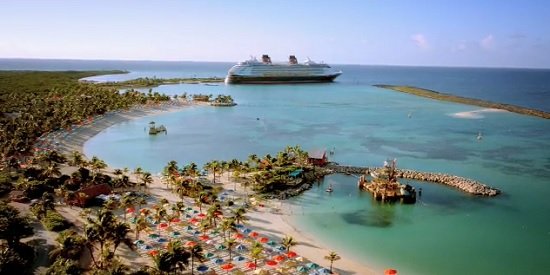 Dozens of Disney Cruise Line workers rode out Dorian in a special shelter on the company's private island, which was hit by tropical storm force winds.

After Disney's private island in the Bahamas, including employees in a shelter there, was hit by tropical force strength winds, the Walt Disney Company pledged to donate $1 million to nonprofits seeking to help the Bahamas.

Royal Caribbean, which also operates a private island in the Bahamas, said it is teaming with the Pan American Development Foundation and will match all donations up to $500,000.

While most coverage has focused on the main islands in the Bahamas, cruise lines' private islands experienced varying degrees of damage as well, while not on the scale of Abaco or Grand Bahamas island.

“The Walt Disney Company stands with the people of The Bahamas affected by Hurricane Dorian,” Iger said.“We hope our $1 million donation will provide much-needed relief and help our neighbors, colleagues, and all those impacted by this devastating storm begin the long process of recovery as they work to put their lives and communities back together.”

Mendez said the Walt Disney Company, led by Disney Cruise Line, “made a commitment of more than $1 million to help relief and recovery efforts in The Bahamas.”

She added that the money is going to non-profit relief agencies “who will be undertaking recovery and rebuilding efforts, as well as the provision of supplies – including food staples and basic construction materials – to those in impacted areas.”

Disney World in Orlando reopened after closing for a day as a precaution, but wasn't otherwise impacted.

Mendez noted that “Disney’s private island in The Bahamas,” known as Disney Castaway Cay, which employs more than 60 Bahamians from Abaco and Grand Bahama and some from other Bahamian islands, “experienced tropical force strength winds.”

“Having just traveled to Great Abaco for a community event one week before the storm hit, I can tell you first-hand that the people of Grand Bahama and Abaco are our friends, neighbors and co-workers,” Mendez said.

The Miami Herald reported that numerous cruise lines with private islands in the Bahamas faced decisions regarding whether to evacuate staff.

Royal Caribbean International evacuated 400 staff members from its island, CocoCay, to a Nassau hotel and their homes, the Herald reported.

The Herald reported that Disney did not evacuate staff from Castaway Cay, but rather had them stay in “the company’s hurricane shelter.”

“One hundred and two staff members stayed in the concrete shelter, which the company said is 20 feet above sea level and designed to withstand a Category 5 hurricane,” the Miami Herald reported. “All crew members remained safe during the storm and the company said no one was injured."

The publication quoted a Disney spokesperson who indicated its private island had been expected to face a tropical storm, but not more severe weather.

“Having operated Castaway Cay for more than 20 years, we have extensive experience managing situations like this, with the care and safety of our crew driving every decision we make,” the Herald quoted Kim Prunty, a spokesperson for Disney Cruise Line, ias saying n an email. “The forecast leading up to this storm showed that Castaway Cay, while in the cone of uncertainty, was most likely to experience tropical storm conditions and that is what occurred.”

The Herald indicated Disney said that “damage to the island from Hurricane Dorian is minimal, requiring minor repairs to landscaping and a roof on one of its buildings.”

It added that “Royal Caribbean and MSC Cruises said damage to their islands seems minor.” Carnival’s Half Moon Cay island experienced beach erosion and no other damage, according to the Herald.

Royal Caribbean said it is making $500,000 in matching donations to the Pan American Development Foundation, which it said is “launching an immediate fundraising campaign to help Bahamian communities recover from the tragedy.".

Disney said its employees “with immediate needs in impacted areas of The Bahamas will have access to a range of resources.”

“The Bahamas is such a special place to us and our guests, and we have watched the devastation created by Hurricane Dorian with concern and heartache,” Jeff Vahle, president of Disney Cruise Line, said. “We stand with the Bahamian people, and especially those in Abaco and Grand Bahama, as they recover from the worst storm to ever make landfall in The Bahamas.”

He noted that the company is taking steps to help its employees, as well as the general population of the Bahamas.

“As the needs in these communities are assessed, we are prepared to aid the relief and recovery efforts through funding, the provision of supplies and by providing support to our Bahamian crew members,” Vahle said.

Disney said that includes “sharing lifesaving information with families before and during emergencies,” as well as helping position supplies “to respond rapidly to natural disasters” such as Dorian.

Disney has long touted Castaway Cay as a cruise destination, inviting “cruisers to enjoy balmy tropical weather and world-class recreation on a Bahamian oasis with signature Disney hospitality” where travelers can use Key to the World cards for transactions.

“Everything needed for the perfect beach getaway is here—from lounge chairs and beach umbrellas to tasty food and family-friendly entertainment,” the company says of its private paradise.

Disney before Dorian said it was doing things to continue to beautify the island as Castaway Cay researchers seek to restore the “health of coral reefs” by transplanting sea urchins and fostering their growth.

The company said solar panels on Castaway Cay are used to fuel water heaters for bathing, dishwashing and laundry for workers living on the island.