First US Moon Landing in 40 Years Planned by Private Company

A private enterprise hopes to launch the first American moon-lander in over four decades within the next two years. 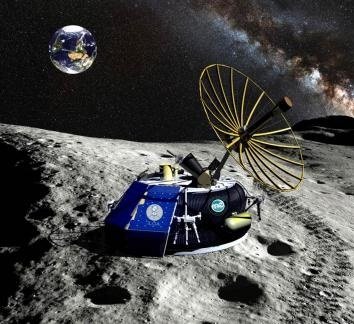 NASA has been hard at work in the decades since the Apollo missions first landed men on the moon in the late 60s and early 70s. The Curiosity rover found water on Mars in September of this year, and in August the National Aeronautics and Space Administration announced its intentions to study Europa for potential life and habitability using a similar rover. Despite cutbacks and other budgetary concerns, NASA has continued to explore space and expand human knowledge of planets beyond our own.

Since the Apollo 17 left the moon in 1972, however, no US entity has returned to the Earth’s natural satellite.  A private company by the name of Moon Express hopes to soon change that by making the first US soft-landing on the moon in 2015 with a new lunar lander dubbed the MX-1.

Unveiled this past week at a press conference in Las Vegas, the MX-1 is an unmanned spacecraft described as roughly the size of a large coffee table. Moon Express calls it a “breakthrough robotic space vehicle capable of a multitude of applications including delivering scientific and commercial payloads to the Moon at a fraction of the cost of conventional approaches.”

The MX-1’s primary fuel source is hydrogen peroxide, an oxygen-enriched water compound, and it will use kerosene as an afterburner to break out of Earth orbit. Once on the moon, the company hopes to be able to mine for minerals and rare elements, then transport a payload of materials taken from the moon back to Earth. The lander is capable of carrying up to an extra 130 pounds of samples and other items.

After the initial mission, Moon Express hopes to put the MX-1 to other uses as well, including cleaning up space debris in Earth’s orbit and fixing satellites.

“The MX-1 is not just a lunar lander, it is a spacecraft workhorse with many markets” said Moon Express Co-founder and CEO Bob Richards. “The MX-1 is the ‘iPhone of space’; a platform capable of supporting many apps including our core plan of exploring the Moon for resources of benefit to humanity.”

Following 2015’s initial “technology demonstrator flight,” Moon Express hopes to be returning samples from the moon by the year 2020.

“We are all empowered by the tools of exponential technologies and the resources of infinite computing, together with digital design and fabrication tools that allow individuals to do what it took whole companies to do back in the days of Apollo,” said Richards.