The funds were raised through sales at the organization’s lobster booth during the 35th annual Oyster Festival in October. 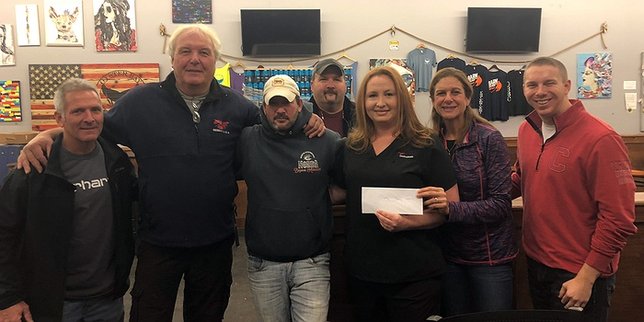 Oyster Bay, NY - December 5, 2018 - Nassau County Legislator Joshua Lafazan (Woodbury) applauded the Oyster Bay Baymen’s Association for donating $2,500 to a family whose young daughter is grappling with an undiagnosed chronic illness.
The funds were raised through sales at the organization’s lobster booth during the 35th annual Oyster Festival in October.
This $2,500 contribution is in addition to more than $35,000 raised for Sheri and Ken Corey, whose 2-year old daughter Brooke is still suffering from an undiagnosed illness, through a Monday, Oct. 29 fundraiser Legislator Lafazan hosted at the Oyster Bay Brewing Company. Legislator Lafazan became involved after hearing the story of the Mill Neck youngster, who has gone from being an active toddler to chronically ill in the span of just a few months. She has undergone a battery of blood tests, MRIs, X-rays and bone biopsies to pinpoint a diagnosis.
“I continue to be inspired and amazed by the compassion displayed by the communities I have the distinct pleasure of serving as a Nassau County Legislator,” Lafazan said. “The Oyster Baymen’s Association decision to make this generous contribution to the Corey family in their time of need is emblematic of this giving spirit.”