1-Year-Old Boy Shot in Face on Street in Brooklyn

An NYC family’s weekend ended in tragedy as they lost their infant son on Sunday evening. 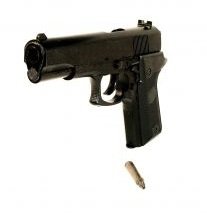 Antiq Hennis, a 1-year-old boy who was being pushed in a stroller by his parents along a Brooklyn road, was shot to death on Sunday. The family was walking down a street in Brownsville around 7:20 PM last night when shots rang out, and an errant bullet struck the young child.

“I heard three to four shots... I saw a man with a stroller screaming: ‘My baby got shot! My baby got shot,’ ” Gina Gamboa, 23, told the New York Post after witnessing the event.

The child was rushed with a wound on the left side of his face to Brookdale University Hospital, where he was pronounced dead upon arrival.

City Councilman Charles Barron said in an interview with the Daily News that “The family is shocked and devastated… The child didn’t even get a chance to start his life, and now it’s over.”

Police are still looking for the gunman, however, investigators have yet to discover who fired the gun or who was the intended target. No arrests have been made.

The tragedy comes shortly after a Huntington Station man was shot to death near 8th Avenue and a young Farmingdale man allegedly stabbed his father after an argument.