Reddish brown algae blooms have taken over much of the bays and estuaries on the east end, and are killing off fish and shellfish in record numbers. 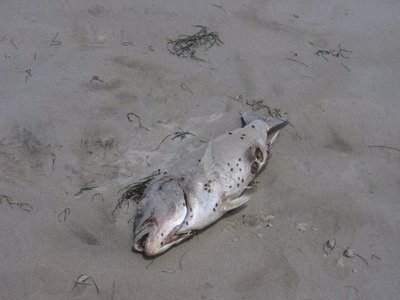 A dangerous tide of reddish brown water has been rolling into fragile estuaries and bays on the east coast of Long Island since the beginning of this week, and it is raising concerns amongst scientists, fishermen, and residents alike.

The reddish brown water is known as rust tide, which carries Cochlodinium, an algae that turns the clear blue water to a reddish brown and orange hue, and carries with it potent toxins that are deadly to fish and shellfish, but are not dangerous to people.  Rust tide is caused by pollution from humans, including waste and fertilizer runoff.

According to News 12, this is the tenth straight year of rust tide returning to the bays.  It has currently invaded the Peconic and Shinnecock Bays, as well as the shores of Flanders.

The fishing and shellfishing industries are expected to take a major hit, as the rust tide carries sediment with high levels of nitrogen that is dangerous to marine life, but not humans.

The rust tide is expected to spread until the fall, or until temperatures drop below 60 degrees and kill off the lethal algae.  If changes are not made to protect Long Island waterways, the algae blooms are expected to return to bays and estuaries next summer.

If it continues, the toxic tide may also spell disaster for tourism to the area.

The New York State Department of Environmental Conservation has not spoken out on the rust tide because of a pending lawsuit.