Bay Street Theatre's latest revival of this Sondheim Classic is entertaining from start to finish! 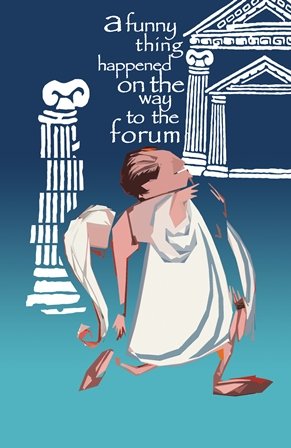 Last week, A Funny Thing Happened on the Way to the Forum, opened at Bay Street Theatre – and after enjoying this past Sunday’s performance, I believe it’s safe to say that this production is sure to bring laughs to the East End. The slapstick humor only served to enhance the laugh-a-minute story, amusing the audience from start to finish. The opening sequence tune, “Comedy Tonight”, set the tone for the entire show, and made good on its promise of an entertaining evening.

Originally performed on Broadway in 1963, Bay Street’s most recent revival of this theatrical classic is engaging from the first moment that Pseudolus (Peter Scolari) appears on stage, until the cast takes its final bow. The story begins as a seemingly simply love story set in ancient Rome –  Hero (Nick Verina), is madly in love with “the girl next door”, Philia (Lora Lee Gayer), who just so happens to already be promised to another man. Unsure what to do, he turns to his slave Pseudolus for help, who subsequently promises to assist young Hero in winning the hand of Philia in exchange for his freedom. From there on out, things get all sorts of wacky – between the hilarious cases of mistaken identity, continual wild goose chases, and comical cover-ups, there isn’t a dull moment in the show.  The entire cast is bursting with energy, and their efforts do not go unnoticed – the entire company’s passion truly brings their respective characters to life.

The whimsical set design immediately piqued the interest of the entire audience – comprised of eye-popping colors and numerous windows and doors where the cast made many appearances through, it provided the perfect backdrop for a show that was simply downright fun to watch. It perfectly suits the slapstick, punny nature of the show, and the outstanding design heightened the entire experience, which was fully engrossing.

Whether you’re in staying in the Hamptons for the summer, or you’re looking to plan a day tip Out East, if you’ve got a passion for comedy, you won’t want to miss A Funny Thing Happened on the Way to the Forum at Bay Street. Tickets are on sale now – you can purchase them through Bay Street’s website, or by calling the Box Office at 631-725-9500.