1,000 to 1,200 pounds of dead bluefish have been hauled in from the Shinnecock Bay, but not other fish species is showing signs of a die-off. Stony Brook University researchers are now stepping in to ... 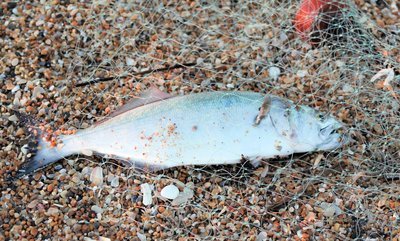 Shinnecock Bay fishermen have been scratching their heads as to what is happening to the bluefish, which have been washing up dead on the shores since last weekend.  Now, the Marine Animal Disease Laboratory at Stony Brook University is stepping in to investigate the unusual die-off of this particular species.

According to Southampton Town trustee Ed Warner, the dead bluefish started turning up last Sunday, June 30.  They first were found floating in the center of the bay east of the Shinnecock Reservation in small numbers, but the number of dead fish found rose exponentially.  By midway through this week, town trustees had removed 1,000 to 1,200 pounds of dead cocktail bluefish, each weighing between 2 and 4 pounds, Warner said to Newsday.

Most of the dead fish that have turned up are found too decomposed to test, but a live bluefish caught by Warner showed no symptoms of disease.

There are many factors involved with fish health, and fish populations can be affected by algae blooms and bacteria from pollution.

"The very odd thing is it's bluefish only," said Christopher Gobler, a professor at Stony Brook's School of Marine and Atmospheric Sciences, to Newsday. "It's hard to know what would cause that."

The bluefish in the Shinnecock Bay also share the water with mackerel, black sea bass, sand sharks, dogfish, and groundfish, but none of these species have washed up dead.

Fishing regulations in New York state that fishermen may possess up to 15 bluefish (including snappers) from a day’s catch, but commercial fishermen by catch up to 1,000 pounds of bluefish.  For this reason, some researchers have suggested that the dead bluefish found in Shinnecock Bay may have been thrown back by a fisherman who exceeded the catch limit.  Gobler believes this to be unlikely, since bluefish are can be sold for a decent prize – 70 cents to $1 per pound.

Preliminary test results from live and dead bluefish are expected to come out toward the end of July.