Lefty's celebrate their right to be left-handed. 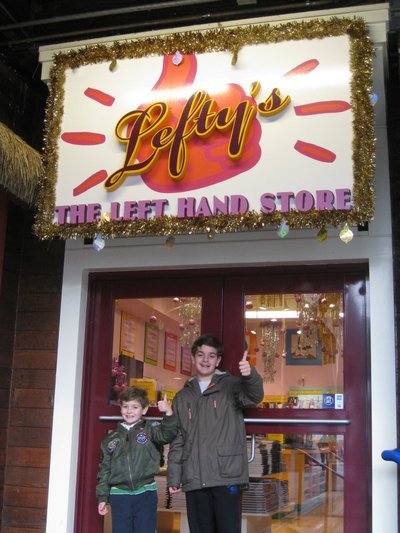 August 13th is designated International Lefthanders Day by Lefthanders International. It was first observed in 1976. As its name suggests, it is meant to promote awareness of the inconveniences facing left-handers in a predominantly right-handed world. It celebrates their uniqueness and difference, who are from 13% of the world's population. Many left-handed people are discriminated against today's society, and are forced to use right handed tools, drive on the right side of the road, and even get harassed. International Lefthanders Day is made to end this discrimination.  The view that left-handers are clumsy and awkward is not down to their natural abilities, but being forced to use right-handed tools and machinery which is completely back-to-front for them.

The way the brain works is incredibly complex, but this simplified explanation will give you some understanding of where our left-hand dominance comes from. The brain is "cross-wired" so that the left hemisphere controls the right handed side of the body and vice-versa and hand dominance is connected with brain dominance on the opposite side - which is why we say that only left-handers are in their right minds!

There’s also a more serious side to the day, which spreads awareness about the special needs of left-handed kids. Think about trying to use a scissor. Cutting out simple shapes using scissors can be a real challenge for young left handed children forced to use right handed scissors. Left-handed scissors have the blades reversed so that the child can the cutting line and so that the natural squeezing movement of the left hand pushes the blades together to make them cut rather than pushing them apart so that the card or paper gets stuck sideways inside the blades.  Left-handed writing requires a correct grip and correct paper positioning. If they are made to write like right-handers, but using their left hand, they often end up with a very cramped position and a "hook" wiring style that is painful and slow - not great for exams in later life! As children start to use pens and magic markets, a left-handed nib cut-off in the correct direction is essential if they want to avoid a mess.

There are specialty stores that sell everything for lefty's.

Looking for a fun way to celebrate? Try to spend the day only using your left hand!